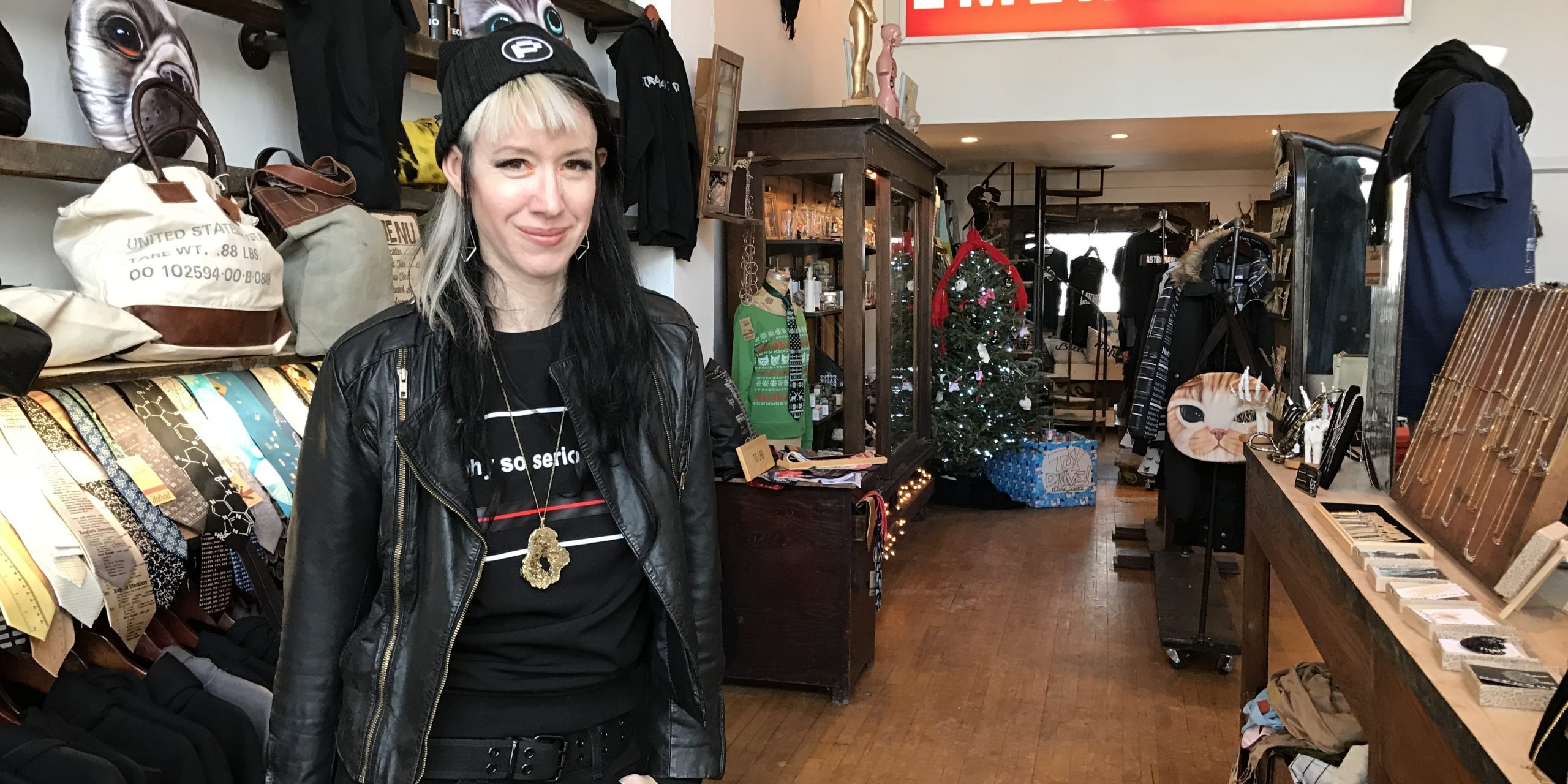 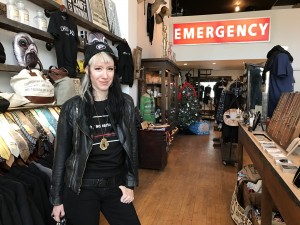 My eyes opened wide as I saw the huge backlit red and white EMERGENCY sign on the back wall. I had a Detroit Receiving Hospital flashback for a split second, but in reality I was a step inside artist Bethany Shorb’s Well Done Goods store. The goat, deer and ram heads adorned in black neckties and printed scarves on another wall as well as the racks of skillfully designed shirts (and more ties) served as timely grounding elements.

There’s a lot of irony in that scary sign as the store itself was emergency after emergency just to open the doors. They received the keys to the Atlas Building’s Gratiot Avenue store front a month before the store’s planned grand opening this past November. Keep in mind it was bricked up in cinder blocks since the 1980s and did not operate as retail space since the late 60s.

The renovation time provided many headaches. Not only did a massive portion (at least a ton) of the plaster ceiling crash to the ground ten days prior to the opening (as it was poorly held together by a few ancient pieces of wood), there were lots of nests and long dead animals that found their final resting place in rather challenging parts of the walls. With sledge hammers, gas masks, caffeine and can do attitudes Shorb along with her husband Kip Ewing and another handy man undid the bandage “repair jobs” of the past, gutted the place to bare bones and transformed it beautifully, right up to the hour before customers poured in.

The burning question is why would Shorb want a store front and retail headaches? She has a successful on-line business with her Cyberoptix Tie Lab, supplying “ties that don’t suck” (and other crafty, hand printed items) to hip boutiques and museum stores around the world. Why be tied (no pun intended) to retail?

Convenience was a huge factor as she has been working in her studio space a few floors above and she has been a staple in that area for the last ten years. It’s a short commute downstairs. There’s also techno history to consider as the strip was part of “Techno Boulevard” (where founders Derrick May, Kevin Saunderson and Juan Atkins had their studios in the late 1980s.) Electronic music and culture is a clear passion and so much of her inspiration comes from it.

Not only that, the block is coming back strong. With growing love for Eastern Market almost all the store fronts on Gratiot Avenue, across from the heart of the Market, are open for business. Pioneers such as Inner State Gallery, Antietam (restaurant), Trinosophes (performance and art space, restaurant, coffee house), Peoples Records, Holice P. Wood’s Detroit Life Gallery (space filled with incredible Detroit music photos, features live music and was Kevin Saunderson’s KMS studio), and SMPLFD Clothing are there now with a few more stores moving in. Heck, Derrick May’s Transmat studio is right on the corner (at Riopelle) and he often visits the store. It was the right time to give it a go.

Liar, in this case, maybe but fat definitely not. She’s a spark plug, a thoughtful, hard working creative machine that rarely shuts down. “I don’t sleep much and I don’t just chill,” she admitted. She has printed thousands of ties by herself in the lab. She’s a lean rebel in a leather jacket and sported a “Why so serious?” t-shirt on the day of our interview. She’s fast cars and motorcycles. She’s welding steel and printing passion.  She’s punk and Detroit techno. She’s funny and real to the core. She’s brilliant and unstoppable.

It’s not only energy levels that got her to this successful point.  It’s the brain power behind everything in the shop. I remember playing a corporate party and one of architects wore one of Shorb’s sharp looking blueprint ties. I was really impressed with how he looked and I observed people pointing and complimenting his tie. I have a pair of her socks with a close up of a Roland 808 Drum Machine and they always get rave (no pun intended) reviews. Her items scream I’m passionate about what I do, I think forward while respecting the past, I have a sense of style, I have a sense of humor and I love Detroit.

Shorb manufactures about seventy percent of the store’s wares on-site. The remainder showcases her expansion into carefully selected home goods, shirts, jewelry and other fun items.

Some of her biggest sellers have been lower price, impulse purchases like script plate necklaces that say almost anything but Detroit by itself. “I’m not going to carry things that just say Detroit. There are other people doing that. I don’t want to step on toes,” she said.  However the necklaces, in their local nature and sassy, cursive ways, say Detroit better than just putting Detroit on them. For example, it’s definitely a Detroit thing to say “Whatupdoe”, which is slang for “what’s up”, when you see someone you know. If you say this to someone who doesn’t get it (it happens) and you get puzzled stare back it becomes a conversation starter. But with one glance to the many that do know, they know you are down with Detroit. They are clever, educational and street all at the same time.

You’ll find Hamtramck, Eastern Market, Cass Corridor, Up North and Motown necklaces that are more Detroit specific and there are also more universal fun ones that say boss bitch, tacos or cat lady. Some are music related and say acid, electro and Detroit techno.

In fact, the Well Done Goods store name came from the idea Shorb had to do a series of laser etched, stainless steel necklaces that are shaped like the temperature marker flags restaurants used to use on meat. “You can be raw or rare, medium or well. We have a vegan one just to be funny,” she said.

Necklaces aside her fondness for electronic music is apparent throughout the store ranging from Techno Boulevard zip up hoodies to socks, ties and pillows that pay homage to the classic Roland 303, 808 and 909 drum machine, to pencil sets with genres of electronic music (ghettotech, industrial, acid, techno, house), to ties and shirts from neighbor Derrick May’s Transmat label and hats from Carl Craig’s Planet E label.

There’s even a shelf rattling sound system that was installed by Detroit sound experts Audio Rescue Team. “We’ve been known to throw fun retail parties and we have to have good sound. I mean, how can we represent on Techno Boulevard and not have proper sound?” Both she and her husband Kip are DJs also.

Beyond her Well Done Goods store and tie designs, Shorb is an accomplished artist. She earned her BFA at Boston University then found her way to Detroit after being accepted to the Cranbrook Academy of Art where she earned her MFA in Sculpture. Her photography and graphic design works are constantly in demand worldwide. Her post 1999 art was heavily influenced by Detroit’s underground music and art scene, when downtown was not so nice. Escaping Bloomfield Hills to head downtown to “the dirty city” was a regular occurrence then as her love of old architecture, blueprints, machines as well as underground parties in abandoned structures took hold and fueled her creativity. Between the décor and items on racks and shelves you can see her influences shine through with every glance.

As we finished our interview in Trinosophes she took a well earned, deep breath. She then finished her last sips of tea and said how very happy she is to have a store on the block. With everything firmly in place now she said she will have more time to create different print designs, find more things to stock the store with and make more art. Oh, and find the next mountain to climb. By gutting and renovating a vacant space completely to open a fascinating store in a month’s time, expanding her internet business and completing her own artwork, she has shown she can do it all well. There’s no obstacle too big. There’s no unsolvable emergency here no matter what that sign says.