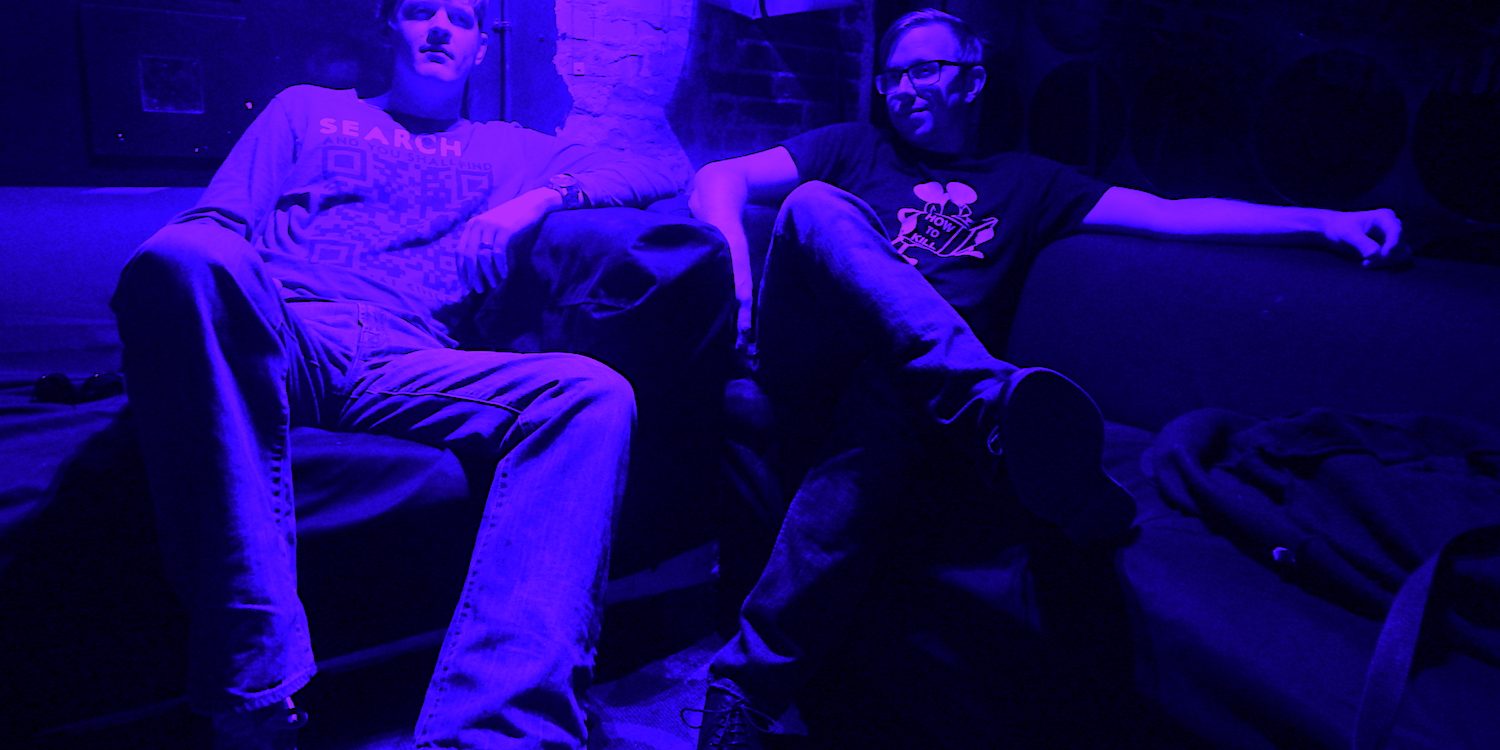 Come celebrate with us!!! Here’s an article about our special guests featured in the latest DEQ Magazine!!

Prop|Mod founders Aran Daniels and Mike Petrack are still promoting parties at TV Bar, were key programmers for last summer’s inaugural Corktown Strut festival and play out as Remote Viewing Party for lucky after-party people who stumble unto their space-dubby DJ sets at the Russell Industrial Center and elsewhere.

But their passion project is How to Kill (HTK), a label made up of friends and collaborators that believe the Detroit underground remains the steady heartbeat of the global underground.

We caught up to Daniels and Petrack at TV Bar earlier this fall and kept talking to Petrack on Messenger and email to finish the interview.

DEQ: Ok, let’s start at the top: how did you guys meet, when and where?

Petrack: Memory calisthenics notwithstanding, I think it was the first Prop|Mod party. Aran was a friend of my partner Chad’s. I vaguely remember meeting him. Eventually I heard a mix that he did. I just remember thinking to myself “this guy gets it.” That was during a certain point in Detroit techno’s development when it was refreshing to hear someone use melody. Everyone had settled into this comfortable little pocket of sounds that were ubiquitous and therefore easy to play together. Aran’s mix sounded like it intentionally avoided the filler, so when we got the chance to play together, things just kind of fell into place.

DEQ:. You started out as promoters and evolved into producers. Describe that journey.

Petrack: Promoting is a strange game. There’s a lot of politics involved. A lot of risk and relatively little reward. Essentially our goal was to get the good shit to Detroit before anyone else would take the risk. That was fun for a few years, and we got the chance to work with some consummate professionals. We never lost too much, never really made anything, but learned a whole lot. Eventually we decided that we’d rather take the risk on releasing music. If you only sell 50 copies at least 50 people have something that lasts forever. Parties are over at 2 or 4 a.m., and the attendees are off to the next bit of their lives.

When we got the chance to start stockpiling equipment, we really started looking for a place to call home. It’s scary to commit, renting a space and buying the equipment to fill it. But ultimately you have to put some skin in the game, otherwise it’s hard to focus and spend the time on writing and producing. We just kind of found ourselves at a crossroads, we could either go all in or let it fizzle. We’ll find out if it was worth it, but at least we won’t have any “what if” scenarios to contend with later on.

DEQ: How many people are affiliated with the How to Kill crew? List some of the artists, producers and technical support you have received.

Petrack: How to Kill is a collaboration between Shady P, The Friend, Aran Daniels and myself.

Marshall Applewhite is also a huge part of the sound. We also released a track from Secrets (Matt Abbott). Other notables are the Broodlings and Stefan Ringer from Atlanta, as well as the Yung Azn Boyz. The Friend masters everything. The good folks at Archer do the pressing and we distribute through Crosstalk.

DEQ: How to Kill is a bold name for a label project – how did it come to you?

Petrack: Honestly… I found an image one night when I was reading about propaganda films from back in the day. I guess Disney did some pretty dark stuff back then. The image that became our logo was from a WWI era Mortimer Mouse cartoon. It just sort of lined up aesthetically with the music we were all writing at the time. The name and the ethos are a little tongue-in-cheek. Obviously, the music isn’t about literal death, just the death of the status quo.

DEQ: Death to the status quo! That’s great, put it on a t-shirt! How many records have you put out? What’s next?

We’ve contributed to a couple of F.A.M.E. tracks on HTK, Corndogs, and Greg Wilson’s A&R Edits. There’s been one Remote Viewing Party Release on HTK 004. We also have a forthcoming release on Josh Guerin’s My Baby imprint. Really excited for that one, a TV Lounge label has been a long time coming.

DEQ: Tell us a little bit about Corktown Strut, the neighborhood festival you guys help program.

Strut is a music and arts festival that takes place over Fourth of July weekend. It’s produced by Forward Arts. Basically we program a handful of venues in Corktown with all kinds of music, collaborate with local restaurants to provide food, and drink. Last year was the first edition, we’re already neck deep in planning for next year.

DEQ: Talk about other programming you do as DJs (clubs, after parties, etc.). Anything memorable? If there is a good story in there somewhere feel free to share.

We play all over the place,  We’ve held a residency at TV for 7 or 8 years now.

Lots of afterparty gigs, those are a lot of fun when the crowd is there. I also enjoy the fact that you never really know what you’re gonna get after 2 a.m. Detroit’s late night scene is kinda like a game of whack-a-mole, with the cops holding the mallet. A new spot pops up and runs for a while, then it gets shut down and the party moves somewhere else.

As far as good stories go, they’re all good stories, that’s our job to make certain of as the DJs.

However, the last time we played at the Works some drunk chick punched Aran in the head, then later on in the set a dwarf jumped on stage and just danced on the DJ booth for the rest of the night.

DEQ: Finally, tell us what is it about Detroit that inspires you the most?

The grit. The dirt. The difficulty of it all. But also the ingenuity it takes to flourish here. It’s definitely changing, we’re seeing a lot more development and new people with more money, starting to soak up some of the oxygen. Our studio is in Eastern Market, in the same building that I threw my first party when I was a senior in high school. So even when things are changing, I still get to take my cigarette breaks on the same fire escape and appreciate the fact that while the spaces that allow us to create are growing more scarce, we can still exist in this new ecosystem.

Honestly it’s up to this generation of music people to keep Detroit on the map. The rest of the world is looking for us, we just have to make the product, whether it’s art, music or cars, ultimately it’s about the work.