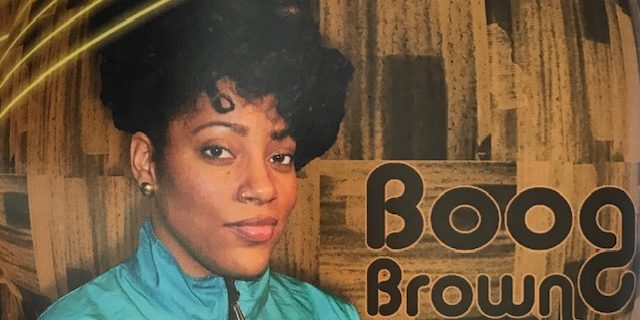 Boog: Hello one and all. My name is Boog Brown, not to be confused with Book Brown, which people often say.

Bet: How did you come up with that?

Boog: I didn’t. My real name is Elsie. In college, my roommate and best friend would call me L Boogie right. That got shortened to Boog over time, and then rapping with some friends my homeboy Wood was like, “You should be Boog Brown”…TADA!!!

Bet: So, what was your first memory of hip hop?

Boog: Watching the “My Buddy” (De La Soul) video on Sunderland Street (West Side of Detroit) on the box…it was something I never saw before! It was Black people having fun, smiling, rapping raps and sounding cool!

Bet: This a DOPE segue to my next question. When was the first moment you said that’s it, I’m gonna be an MC? I can recall the moment I said this is what I’m made to do. If it doesn’t make me money, coo, I’m gonna be happy being a DJ.

Boog: Believe or not I was in Atlanta at 957 Oak St. in the West End. I was living my life and going to school, so I could make sure there was a check coming in. I didn’t know what I was gonna do with my life, but I had skills. I can put words together.

Bet: Before you ever thought about being an MC, have you ever recorded before?

Boog: Not necessarily, I mean, I recorded some shit with (14 KT)

Bet: Woah, that’s not just anybody!

Boog: I was recording…not that I wasn’t any good. I was still such a novice that I couldn’t call myself a rapper or an MC. At that point I was a novice, a poet at best. I made this mixtape and I got a good response. I had been just playing around with rapping and I knew some dope rappers…some COLD motherfuckers! Not like slum ass “… bust you in your chest, I’ll wet ya.” Not those MCs, but like Elzhi (Slum Village), he’s walking around. I can touch this motherfucker! Baatin (Slum Village), I can reach out and touch him. I mean like I’m among some of the coldest in the game! So, I was like, if I’m gonna do this, I can’t half ass it. And then I moved to Atlanta.

Bet: Now were you looking for shows out there?

Boog: Nah. I was out there looking for general type work, because I wasn’t making any bread.

Bet: That was my next question, why did you move to Atlanta? It seems like the more promising artists in the city move out for more recognition, that wasn’t your case?

Boog: I’ve heard that a lot but what’s to be said of Phat Kat (Ronnie Euro) of DJ Dez (Andres)? They travel the world. What’s to be said about Aretha Franklin, who didn’tleave Detroit and still made it? How can I leave home?

Bet: We’re gonna step a little off topic here, but not really. We’re still talking about Detroit. If there was a Mount Rushmore of Detroit hip hop gurus, who would be of yours?

Bet: It’s no disrespect to anyone. We’re in the land of great MCs.

Bet: Now, you just put Miz Korona in your Mt Rushmore. You both are in a male dominated industry and everyone expects the same type of shit from women. How do you separate yourself from the other women?

Boog: I just make good work! I tell my story. What else can I do? I’m not here to entertain you although you are entertained by me, however that works out, it works out. I’m just here as a woman and you don’t get to pick and choose…I’m an MC, absolutely, but I don’t need to stand out, I’m just me, and no one can be ME, ‘cause that’s the name of the game.

I mean you amplify through marketing schemes, consistency and good work. My job is to put out the work. I don’t need to stand out, because if you fuck with me, then you fuck with me. I don’t need a gang of muthafuckas to fuck with me. It would be nice perhaps, if that translated intomoney somehow, but that’s not the reason we do this! We do this, because, we make art and it helps us. I don’tknow why other people do it, but it is a really DOPE outlet and I’m really privileged to do what I do. I don’t really worry about standing out in a male dominated industry. FUCK THEM!! They’re lookin’ at ME!