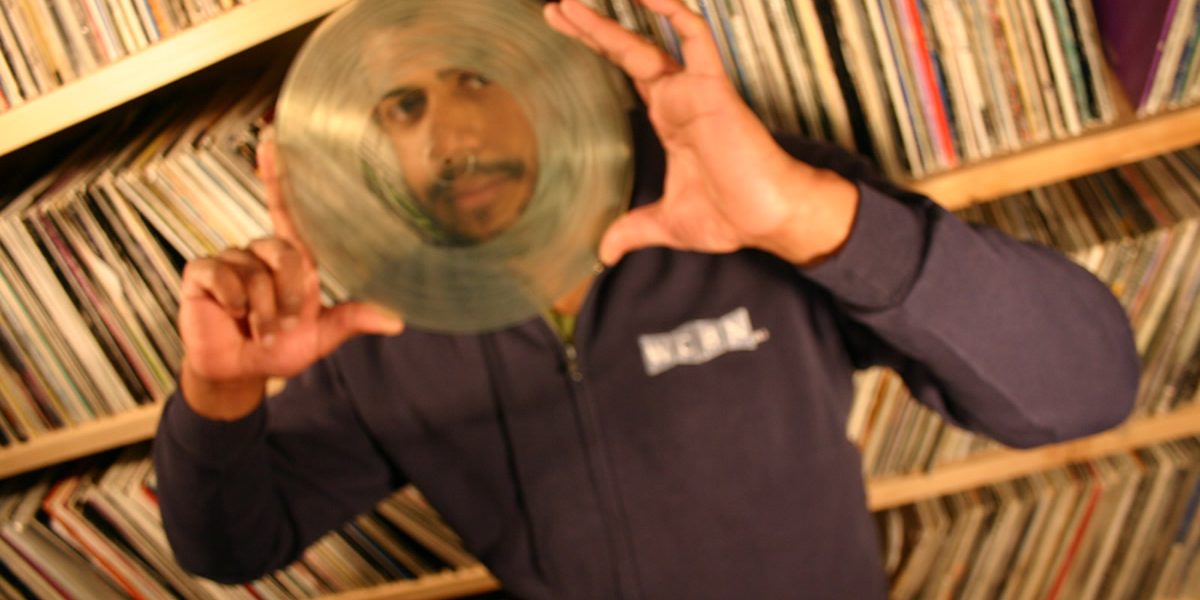 Carlos Souffront is a mainstay of the electronic music pedigree. Between the innovators of Techno and the new breed, Souffront, as a DJ, has double-handedly taught his audience how to be moved. He is known for playing “intelligent dance music”, which must then include Acid House, Techno and Industrial, for starters.

There is more than one Carlos Souffront. In Puerto Rico there is an attorney by the same name who works in mergers and acquisitions – not unlike the sound mergers perfected by this Ann Arbor-based DJ. For 10 years, Souffront has enigmatically graced turntables in homes, warehouses and clubs in Detroit and overseas. Souffront is detached; letting the records speak for themselves, but there is plenty to say and know about the man standing behind the decks.

LW. Where was your first residency?
CS. Zoots in 1995. I had just bought my first [Technics] 1200 the year before and I ripped off my dad’s belt drive Technics and got a mixer. Before that I would record my records onto cassette and I learned how to beat-match by beat-matching the record to the cassette.

LW. At what point did you know you wanted to become a DJ?
CS. I think it was always there. Growing up, I was kind of a weird kid; I didn’t have toys, I had records and cassettes and I would make mix tapes for myself. To me, as a DJ, you just choose songs in a sequence that means something to you and I always enjoyed doing that. There was a DJ from Indiana, DJ Sho, who said (and this always stuck with me), “It’s just an interesting way to listen to music.”

LW. Your parents didn’t buy you toys; they bought you music instead?
CS. Yeah, I would go to Kmart with my mom and go straight to the records. I was always passionate about music, either from songs on the radio or from listening to the records my dad had. My dad would give me a description of the picture and color of record labels and have me find the records for him. So, as a kid, I was my dad’s jukebox. I loved Prince, R&B, new wave, Blondie – all of that stuff. I still have my Blondie, “Rapture” 45.

LW. Do you remember what your first record was?
CS. No, it’s too distant of a memory, but my sister was a big influence on me musically and in 1988, she brought home an acid house compilation called “House Hallucinates” and Lil Louis’ “French Kiss”. Those were the two records right there that pretty much kick-started me.

LW. Do you think of “French Kiss” as being Derrick May’s signature record when he plays a set?

CS. Yes, absolutely. He doesn’t just play it; he plays the fuck out of that record and he mixes that record like nobody else and even though I know he’s going to play “French Kiss” again, I know it’s going to be special.

LW. If “French Kiss” is to Derrick May, then what track is to Carlos Souffront?
CS. Phuture “Acid Trax”. I have this method where I always play “Acid Trax” the same way and I always drive it the same way. I have five different pressings of [Acid Trax] and three of them skip right at the point where I mix it in.

LW. What or who has influenced your DJ style?
CS. My style is based off of Detroit and Chicago mixing style, but my style has been more detached. I always wanted it to seem like the mixes were just happening, and I just happened to be standing there, so my style kind of reflects that; it’s quiet and subtle. I want the record to be the most important part. I guess it’s easier to say that my style isn’t: I don’t scratch and I’m not that heavy on the crossfader.

LW. If you hadn’t become a DJ, what would you be doing with your time?
CS. I just can’t imagine not being a DJ. I guess I’d still be doing what I was before like work at a record store, a radio station and just be a music fan.

LW. You’ve been (co) hosting “Crush Collision” on U of M’s WCBN (88.3 fm) for nine years. How did you get your start at the radio station?
CS. After my residency at Zoots, I started playing electronic music to an audience that wasn’t necessarily dancing. When [Brendan Gillen a.k.a. BMG of Ectomorph] realized that I could mix, I became the featured DJ on Crush Collision and I did an ambient show that came on after Crush Collision called “Bliss”. Since [Gillen] is a busy guy; making a career out of music, I took over the show. Now I have co-hosts, Todd Osborne and Pete Liedy. We’ve also had lots of guests come in.

LW. Who are some of the guests?
CS. You name it: Patrick [Russell], Derek [Plaslaiko], Keith [Kemp], Theo Parrish, Stacey Pullen, Richie Hawtin, Magda, Dan Bell, Carl Craig – everybody’s played at Crush Collision at one time or another.

LW. Let’s talk about venues. Your set at the Underground Stage, Hart Plaza, during the 2000 Detroit Electronic Music Festival (DEMF) sounded like the perfect fit for your sound.
CS. That was really special; that is the venue I really like. I really like playing in a huge cement block, maybe it’s just from growing up going to warehouse parties, but I want the music to be really loud and to echo through a large space. I also like open air, and the idea of sound traveling over a distance, and you can here the music but it’s through so much atmosphere, again that kind of detachment, where you can’t reach the sound, it’s like somewhere far away.

LW. Do you feel a certain kinship playing in Detroit compared to other cities?
CS. With every record I play, there’s meaning to me playing it at that time in history, and at that time in the mix. There are records that have so much resonance in Detroit. You play them in Chicago or New York, they don’t’ mean the same thing. Like Visage’s “Frequency 7”. Not a Detroit record, but one of those records that was adopted in Detroit and has such weight and it means more to people [in Detroit] than in New York. If you played that now in New York, they’d say “Oh, that’s an Electroclash record”. No, in Detroit, that’s a deep black radio record.” And, of course, Detroit records played in Detroit, that’s heavy you know, playing “Cosmic Cars” [Cybotron] or “No Ufo’s” [Model 500] in Detroit, it doesn’t mean the same thing anywhere else.

LW. Tell me about some of your favorite parties over the years.
CS. I would take Woodward (from Detroit) all the way home (to Troy) and on Woodward and 7 Mile I would see club lights on the 2nd floor and wonder, “What’s going on up there?” It was “Heaven” for real and figuratively. House music never sounded better to me. Also, 1515 Broadway and being at all the Packard Plant parties. Parties I wish I could’ve been at were at the Bismark Hotel and seeing Ron Hardy at the Music Box (both in Chicago). There was such a mixed audience in Detroit and everybody danced and all the people were like me; smart kids that didn’t want to go to keggers and they wanted to find something new and they found it. Maybe our generation is the generation that will switch on the next generation.

LW. What DJs have influenced you?
CS. My friends have inspired me a lot like Patrick [Russell], Derek [Plaslaiko], Brendan [Gillen], Tadd [Mulinix], Todd [Osborne] and Traxx. Other DJs who have inspired me are Richie Hawtin, Derrick May, and Jeff Mills because they have such focus.

LW. If you were an architect and could design the place you’d play at, what would it be like?
CS. I like to play in warehouses and I don’t care about having the best acoustics. I’m not an audiophile; I actually like bass that is out of proportion. I prefer quantity over quality. I think there should be a lot of space to dance and it should be in front of a monolith of speakers. The place would be super comfortable with a balcony to relax, sit down and listen with a pit and a DJ booth and not a lot of light, but I like strobe lights.

LW. If you had to choose between working at Zingerman’s or working at a record store, which would you choose?
CS. My jobs have always been a way to cut my expenses, and I have a lot of records, and I still discover new songs in my collection so I don’t feel this burning desire to buy new records all the time, but I am hungry all the time, so working at Zingerman’s cuts my expenses because I get to eat fabulous food and never go hungry.

LW. Please recommend a cheese.
CS. Cheese is like records, sometimes you want something way funky like almost way far-out that not everybody’s gonna get, sometimes you want one that you know everyone’s gonna like, sometimes you like something so much you think everyone else is gonna like it but they don’t, and sometimes you like something so much and you give it to someone else and they like it , too because they see what you like in it.
I would recommend a sheep’s milk cheese from the French Pyrenees, Ossau-Iraty, and it’s just one of those cheeses that you put into someone’s mouth and they’re gonna say “Oh, okay, that’s good.” It’s one of my favorite cheeses, it’s ancient and it’s really good.

LW. What is your favorite color?
CS. I like combinations of solid colors. Orange and blue, baby blue and brown, pink and green. I really like polka dots. I also like texture with color. I do like uniforms.

LW. What movie would you like to make a soundtrack to?
CS. I’d rather make a movie to accompany my soundtrack. To have sound & vision perfectly integrated.

LW. Lastly, what record do you want to die listening to?
CS. I’ve died to records already, but I’d have to say “Analog Heaven” by Born Under a Rhyming Planet.