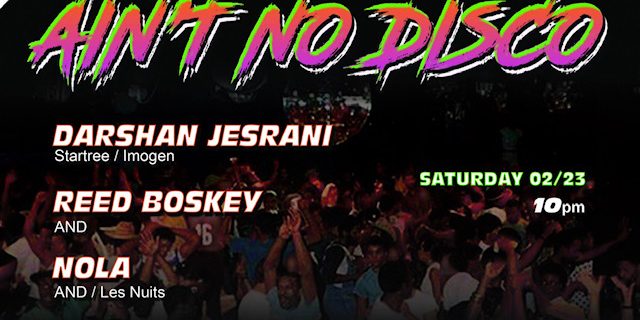 Brooklyn based Metro Area’s music truly stands the test of time. In 1999, hearing “Atmosphrique” in the club for the first time was head turning, “what’s that?” type experience. It’s house, but with synth nods to jazz, boogie, world, minimal, disco delivered in  a slick, yet funky stripped down style. Through the years they (Morgan Geist and Darshan Jesrani) have been delivering fun dance tracks ever since, both individually and as Metro Area!

Jesrani will be in Detroit to DJ on Saturday, February 23rd at Whiskey Disco for a party called “Ain’t No Disco” along side Nola and Reed Boskey. He took some time to answer a few questions about his music and Detroit! https://www.facebook.com/events/398513720955890/

VP: Your records are so versatile and can work in any environment. Was this deliberate or a natural thing for you?

DJ: Thanks a lot.  I’d say the music is always very deliberately made to reflect certain influences and  references, but the idea that these records would end up being considered versatile is not something that I would’ve predicted or counted on.

VP: Would you tell us a bit about your musical influences growing up? Do you have a song that was an “oh shit” moment and got on your musical track today?

DJ: Yeah, I always seem to refer back to the same 2 or 3 songs I heard when I was a little kid which helped point me in the direction of the synthesizer.  One of them was “Tom Sawyer” by Rush, which my older cousin turned me on to when I was about 8 or 9.  Another one was “Whip It” by Devo which, to me, sounded like a pinball machine and fit perfectly into my whole childhood cosmology of science fiction and video games.  Typical boy stuff.  The 3rd and perhaps most relevant to the disco music I make and play today is Giorgio Moroder’s “The Chase” from the Midnight Express soundtrack.  My 4th grade teacher let me borrow her Casablanca 12” single and I held onto it for a while, playing it over and over on my Dad’s turntable, sitting on the floor of our living room.  Then there was the whole world of early drum-machine hip-hop which I listened to non-stop on radio stations broadcasting from New York City.

VP: From Motown to techno who are some of your Detroit influences?

DJ: Detroit has always been a little bit mystical to me, coming from New York = more about an idea than any particular influences, to be honest.  Of course there’s Motown and the towering legacy of Black songwriters and musicians from the American Midwest who shaped the tastes of the world, but Detroit has also been the locus of a lot of very powerful socio-economic and political changes.  The 1968 riots, Vietnam and its effect on the city, the auto industry being the canary in the coalmine for the de-industrialization of the rest of the country, for example.  Even when I was in college in the early 90s I could hear some sort of magic in the sounds coming from Detroit – Eddie “Flashin’” Fowlkes compilations on Pow Wow Records, Jeff Mills’ X-103, etc.  Reading back through interviews with Rik “3070” Davis, who was deployed in Vietnam, it all made more sense – the idea was to use available technology as a way to maneuver around and empower oneself and one’s community in the face of sweeping, macro changes when the government and broader economics fail.

VP: Did you play a lot of instruments growing up?

VP: What gear did you make your first recordings on/with?  Did you have a favorite synth to use?

DJ: My first recordings were made on a Korg DSS-1 sampler, Korg T3 workstation and a bunch of borrowed stuff – an Ensoniq SQ-80, a Roland S-550 sampler, some sort of janky Tascam cassette multitrack.

VP: How has your studio changed from then to now? What do you use to make music?

DJ: It hasn’t changed all that much, to be honest – I still have my DSS-1 and I still use an SQ-80.  I guess it has just developed into a better-sounding project studio.  It’s still a bunch of stuff, cobbled together.

VP: When did you decide to become a DJ? Were you producing music before that?

DJ: I never really decided to become a DJ.  It was always sort of in the air – I got my first pair of turntables in 1996, but I DJ’d at my high school girlfriend’s sweet 16 party years before that with one turntable and a cassette deck.  I played “Voodoo Ray” off of the Warlock 12” I bought at Strawberry’s and “Enjoy the Silence” from the Violator cassette.  More records and DJ gigs starting trickling in during the late 90s but it wasn’t until Metro Area that I started to be asked to DJ out of town.  It didn’t take long for me to realize that I sucked and that’s when I decided that it was something I really wanted to be good at.  Having great taste in music is one thing, but knowing how to play it for a room is something else entirely.

VP: What kind of music are we in store for on Saturday?

DJ: Fun party music of all sorts, from different styles and different periods of time.  For example, I let Nola know that I’ll play Brian Auger and Steve Rachmad in the same set, so while my taste might sound all over the place I promise to connect the records together in a cohesive and fun way.  “Eclectic” is not how I’d necessarily like to be described.

VP: Are you more vinyl or digital these days?

DJ: Both – the stuff I find on vinyl I tend to play on vinyl unless inspired to convert it for some reason, and the same with digital.

VP: Are you going to have a Coney Island hot dog at Lafayette during your visit?

DJ: Oh hell yeah, lemme at it.  Being a New Yorker I’m curious about the “Coney Island” designation but I’m always down for a good bite.