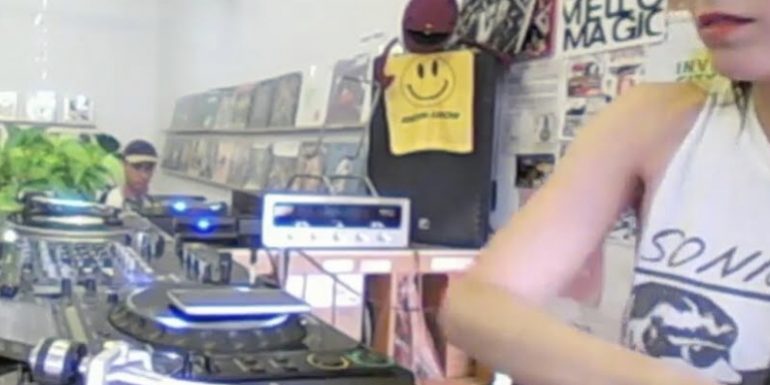 It’s always a pleasure to hear that a new International DJ takes a residency here in Detroit. Diana McNally aka Automaticamore, who hails from Toronto, Canada, will touch down at Whiskey Disco for her new monthly Night Moves club event (first edition Friday, Feb 1, 2019 w/JAZ) She skillfully mixes Italo, synth-pop, new beat and more styles together all on vinyl  keeping dance floors electric and eclectic all at the same time. Hot on the heels of this great event, we sent McNally a few questions to answer for your inquiring mind:

1) Your DJ name, Automaticamore, what is the story behind it?

Automaticamore was the name of a radio show I had on the (now defunct, yet eternally amazing) Toronto Radio Project (TRP). I actually never intended it to be my DJ name – let’s face it, it’s unnecessarily verbose and difficult to spell – but venues and promoters started describing me as ‘DJ Automaticamore’ and it stuck. The name itself is the b-side from a Patrizia Pellegrino 7” that I own, which incidentally is one of the greatest Italo tracks imaginable.

2) Where did your love for Italo and synth pop come from? Who are some of your biggest influences?

This sounds contrived, but I actually don’t know how or why my fascination with Italo really came into being. I was a major Madonna fan as a child, and loved any Tears for Fears that came onto the radio – and Icehouse’s ‘Electric Blue’, which is really embarrassing now – and I’d wager that my on-going obsession with electronic 80s music stems from there. However, my dad was an intensive collector of jazz, and while I’ve inherited his love of music and vinyl records, I think I gravitated subconsciously toward Italo and synth-pop because it is essentially the opposite of jazz. The anti-Dixieland. Incidentally, I’m pretty sure my dad thinks my music sucks.

If I had to cite my biggest influences, I’d have to name both JAZ and Hysteric as my favourite obsessive music nerds (this is a compliment). Otherwise, I don’t think I listen much to other DJs. I tend to spend a lot more time conversing with collectors and enthusiasts online than listening to mixes.

3) The argument about vinyl versus digital DJing is raging and controversial here in the D. What is your take on it? Why do you prefer to use vinyl?

All of the music that I play was made for vinyl, so it feels natural to adhere to the medium. I’m also a collector first, and my apartment is a testament to arcane media – VHS tapes and vinyl records in particular. My first masters degree is actually in Museum Studies – yes, it’s a field of study – which speaks to my drive to collect, preserve, and share artefacts. I’m specifically attracted to VHS and vinyl because in many instances, the content only exists on these particular media. Lots of films weren’t transferred digitally, and I still dig up tonnes of records that can’t be heard online. The whole onus of my YouTube channel began as a way to share vinyl rips that couldn’t be heard elsewhere.

I kind of veered off topic there, but I also prefer to DJ with vinyl because it is a much more tactile, visceral experience, and it requires a lot more thought and active listening. The constraint of only having what’s in your bag is also a fun challenge for me, and although this is a played-out word – remember that I have a Masters in Museum Studies for some reason! – packing a record bag is akin to a curated effort.

4) I’ve heard a number of sets online, and as a digger of records myself, it’s immediately clear that you have a record bag of some pretty obscure and hard-to-find Italo-disco records. Describe the feeling you get from the discovery of those gems.

If the Borg had emotions, I bet it would feel a sense of deep satisfaction at having assimilated a new species to add to its own distinctiveness and quest for perfection. That is me with a new record. That sounded pathological, I realize.

5) How often do you hit record stores or do you shop more online? Do you feel records are making a comeback?

Unfortunately much of the music I’m drawn to is not readily available in North America, so much of my shopping occurs on Discogs. However, as a collector of Canadian electronic disco, I still dig occasionally and find a lot of undiscovered gems all of the time.

6) What is your take on edits? What is the originals to edits ratio for you?

I’d say one in every 20 to 30 songs I play is an edit? In some cases, a judicious edit really does improve a song’s structure and flow, but I shy away from a lot of disco edits because they often eliminate the vocals. I’m a vocals guy and am known to sing along to songs while playing.

7) You have a career in a completely different field of work during the week, and while the weekends find you traveling all over the world playing records. How similar or different are each in terms of finding fulfillment?

They are very disparate worlds. I am an active social worker, supporting people who are street-involved and managing substance use and mental health barriers, as well as a teacher of social work. A lot of people in that world do not know that I also DJ, and I mostly keep them separate. That said, I need the creative/nerdy fulfilment of music to stay happy, and I also need to feel like I’m making contributions to the world that are palpable. They are equally important to me.

8) What was it like to play in Detroit for the first time? How the city and environment different from the other places you have played?

I was so nervous the first time that I played in Detroit that I really overdid it on the vodka before I played and was a total mess for the first hour of my set (my apologies to Freakish Pleasures last April, who were the first to book me). That said, once the nervousness (and alcohol) subsided, it was bananas! Detroit is by far the most fun city that I’ve ever played. Really. The city is a musical cauldron and always has been, and I’ve never encountered a more open crowd in my life. I’ve watched people freaking out to tracks that would clear a room in Toronto. Detroiters have an ear, and they respect diggers and collectors in a way that I have never encountered elsewhere – all without a hint of snobbery.

9) So the Whiskey Disco is the home of your new monthly event, Night Moves. We noticed that you’re sharing a bill in February with one of our oddball heroes, JAZ. Just curious, how has JAZ entered your stratosphere musically, and how did this billing come about?

JAZ, as I mentioned, is one of my two musical heroes. He is so singular, so specific, and has such a great sense of humour in his song selections. I’ve been kind of stalking him for the past decade or so, initially through the Dream Chimney and subsequently through his releases and edits. I was really thrilled that he didn’t reject my online messages, and in fact is an incredibly kind and generous person. Maybe I’m talking out of my ass, but I feel like we have a rapport? We’re both in humanist professions and have similar taste and humour. Anyway, he accepted my invitation to come play with me on my birthday at the Whiskey Disco, and I couldn’t be happier.

10) Do you have some Detroit artists you’d like to meet, spin with or both?

11) Coney Island hot dogs are a Detroit thing. Are you going to have one when you come to town in February?
Okay, this boggles my mind – what is the history of the Detroit Coney Island? I mean, I’ve been to Coney Island, I’ve had a Nathan’s hot dog. How did this become ubiquitous in Detroit? And also sure, I’ll have one. I may be a connoisseur of Italo, but I’m also a human garbage can for junk food. Bring it!