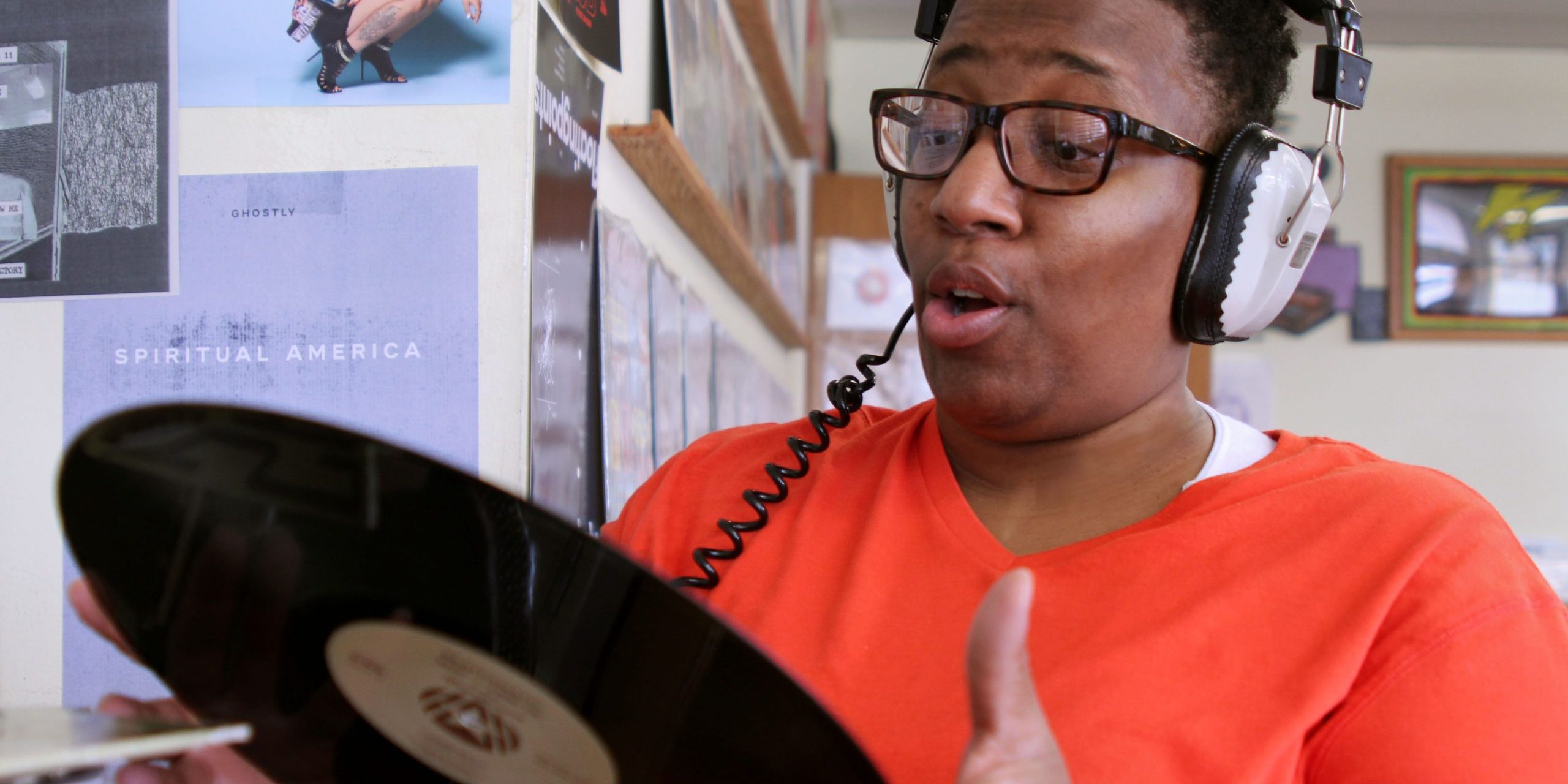 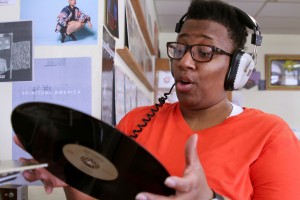 Photos by Linda Kubit
Terri Whodat McQueen is one tough and talented DJ and producer. After much hard work, playing club nights, hundreds of internet radio shows, opening a small record store (Ya Digg!) some years ago, and lots of health scares over the last ten years, her love for life and music continue to shine through! She is an inspiration. You have to check out Viola Klein’s “Exchange” featuring Whodat. It’s a must!
DEQ: Where does your unbreakable spirit come from? We talked about judgmental people many times… how do you overcome obstacles?
TM: I don’t know. I guess I was born with it.  I learned a lot by watching my mom while I was growing up. She went through a lot raising me by herself. Being a Black woman in America ain’t for the faint at heart now!  I can’t even imagine what being a Black woman was like when she came up but she made it and raised me to be the best human being that I can be.

DEQ: What role does music play in this?
TM: Music is life. Music is love. Music gives me strength. Music is helping me recover from brain trauma from the last surgery I had. Music has kept me from going over the edge. Music keeps me focused. Music soothes my soul. Music has connected me with some great people. Some bad ones too (laugh.) Only the good ones stick around though.

DEQ: When did you know how important music was?
TM: Music has always played a significant role in my life. I listened to music on the radio. There were shows from Martha Jean “The Queen”(WCHB), Jay Butler, Mojo, The Wizard, Mason, Marvelous Marv, Foody, Rosetta Hines, just to name a few. I was always messing with my momma’s 45’s. She took me record shopping ever since I can remember. I have had to put a few radios to rest, they just blew up and my mom would buy me a new one the next day. Couldn’t take it no mo (laugh!)

I think I really understood when I was 10 years old. I started to pay more attention to records I already had and began to ask for specific records. I was becoming more interested in stereo equipment and how it worked. I always went record shopping worth my mom and there was always a radio or stereo around but I think that was the age I became more intrigued with them.

DEQ Tell us how you started DJing, your first experience.

TM: My first DJ experience was in Raybone Jones’ basement. One day after hanging out at Vibes New and Rare Music (Rick Wilhite’s store for those that know) Rick (Wilhite), Marcellus (Pittman) and I went over to Raybone’s crib to chill. They were all taking turns putting on records. Then out of the blue Bone was like, “T you never put on any records.” I was like “I’m good, I’m enjoying what y’all playing.” He pulled a record off the shelf, gave it to me and told me to play it. We all laughed and I was like “alright fool, Damn! Trying to enjoy my drank and chill (laugh.)”
While I was putting the record on, Raybone was like “oh yeah and you gotta mix it too fool.” I’m thinking what? I said “fool, you know I don’t know how to do that shit!” He was like “well, figure it out.”
So, they just went back to talking about whatever we were talking about and I was trying figure out what the hell I was doing. I had seen DJ booths and setups at parties and cabarets but I had never been behind the decks before.He (Raybone) had those Sony headphones that would always break, so only one headphone cup worked. He had a rotary Numark mixer and two Technics 1200s. I just stood there for however long it took me to figure out how to work the mixer, the one headphone cup and the slider thingy (pitch.) I blended the record he gave me with the record that was playing (and I don’t remember what the records were because I didn’t know what they were but they both sounded sweet). Then it got really quiet while the two songs were playing, and when I turned around Wilhite was like, “Are you sure you have never DJed before?” I said “nope.” I sat down and started enjoying my drank again.
After that night, I still was not trying to DJ at all. Randomly, for months, the guys would give me advice about spinning or records and Marcellus just kept asking me when I was going to buy my turntables. One day I was at Vibes and Marcellus was like “fool, for real, when are you going to get you turntables?” I told him if I found two Technics 1200s for $400, I would start spinning that day. This was a crazy lowball amount for two Technics, because I was not trying to spin. He even said now you know you are not going to find 2 Technics for $400 and I said, “you never know.” This was in 2005 and CDJs were becoming popular. We went on eBay and the first listing that came up was some dude in Texas selling both of his Technics 1200s for $375 + $25 shipping. Marcellus patted me on my back and said “well sis, I guess you are gonna start spinning today.” I started spinning that day.

DEQ: Who is your biggest influence?
TM: Momma. She is a harder worker and a fighter. She helps me stay strong and keep pushing to reach my goals.

DEQ: You did an internet radio shows for years. How did that help your local and international exposure?

TM: I think it helped my International exposure more than it did my local exposure. At the time, I was doing the internet show I did not have much of a local audience. When I travel internationally, I meet a lot of people who listened to show. Some people at home still don’t I even know that I DJ so they are definitely are not going to remember that I had an internet radio show.

DEQ: What music projects are on the horizon for you?
TM: I’m working on some thangs. I’m on the Futura Artists roster now so I will be touring in the Spring of 2018.  I’m working on a few projects in 2018 for Sector 7-G and Portage Garage Sounds. Stay tuned!

DEQ: Congratulations on your college graduation!  What made you choose Music Technology?
TM: Thank you!!!! This was a bucket list item. Yes, I have a bucket list. I have had to deal with illness all my life but after the last one, I’m tired. It’s the first time I have ever felt that way. So, I’m going to do as many things on my list as can do while I can.

I love school but I hate the bullshit and politics it takes to get through school. So, finishing school was on the list. I chose Music Recording Technology because I felt like it would keep me interested in school and enhance my recording skills. Music technology has advanced very quickly over the last ten years. I love music and technology so being able to learn how to use all the new toys is fascinating to me. A lot of people complain about there being too many DAWs and music equipment to choose from but the upside is that you can now tailor fit your workflow. It doesn’t matter whether you are using hardware, software, or instruments. You can find whatever fits your music making style, get it recorded, and put it out on the format that you want it to come out on.

DEQ: Do you have advice for people?

TM: Whatever it is you want to do, make a plan.
When something in that plan doesn’t work out, revise the plan.
If you change your mind about that plan, make a new plan.
Go to Top