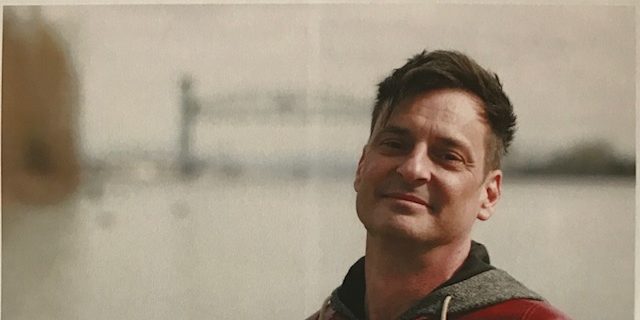 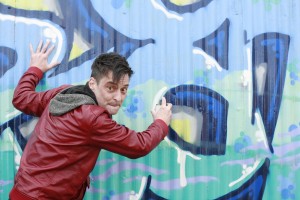 Kraig Tertzag (aka Kraig Love) released his last Detroit techno project under his MOODRING moniker back in 1995 on Planet e. I sat down to interview him recently at his home in Portland, Oregon to discuss music, life, his first MOODRING project in twenty-five years and his return to the world of dance music.

L.Uehara: So Kraig, what originally brought you to the dance floor? Where and when did it all begin for you?

Kraig Tertzag: Funny you should ask in just that way, because my interest in music began on the dance floor. In 1982-83 I went to the Clark Park YMCA (Southwest Detroit) every Sunday. There was a weekly, all ages dance night complete with a DJ, light show, the whole nine just for kids. It was sweet. Those dances were like my church every Sunday.

KT: I am exactly three hundred and thirteen years old and today‘s my birthday.

LU: OK then. Well happy birthday Kraig! So back to how dancing was a big thing in your childhood. If dancing was your main interest, when exactly did you make the jump to making music?

KT: I danced on the legendary, local Scene dance show and then after that I danced on another local TV dance show named Heatwave. But regarding the transition into music, to me, it was more like an evolution.

You have to understand that in my generation, music was compulsory in elementary school. I may have grown up in the very last generation in Detroit where everyone had to learn standard notation in order to pass onto the next grade. So, music was always there as far back as I can remember. My grandmother Rose gave me my first instrument, an Armenian dumbek, when I was 4 or 5 years old. As far back as I can remember I have been playing some sort of drum or drum machine.

Then around 1984 my older brother Kyle started cutting his teeth on turntables. He was a college radio DJ at WHFR (Henry Ford Radio) at that time and he had a whole set up in the basement consisting of two turntables, mixer and a microphone. That is probably when my interest in music started to supersede my interest in dancing. Shortly after that I got my first drum machines and started spinning records too.

LU: Tell me about MOODRING?

KT: It’s indigo right now and that means everything is just swell.

LU: But really, you released only one song under your MOODRING moniker called “Sopping the Biscuit” on Planet e almost 25 yrs ago and then nothing until now. What have you been up to?

KT: Actually, before I left dance music, Carl Craig tapped me to play live drums on the now legendary “Science Fiction” track on his debut full length album Landcruising (1995,Blanco Y Negro label.) In 1996 I released a track on Fanon Flowers’ label, a song I made with my old friend John Boys entitled “Sweet Rain” (Mechanisms Industries M1972, under the name Kraig Allen.) I also recorded a full length double album of twenty-five songs or so for KMS records in 1995, but unfortunately that project was never released.

LU: Alright but then you went on a 20+ year hiatus?

KT: What can I say? Life happens and I got really busy. Moreover, in the mid nineties, I was really disappointed that Detroit techno music started to really go the way of drugs and wonder bread. Things changed rapidly with Detroit techno then. Since then I played percussion in several bands over the last twenty years, everything from jazz to punk styles.

LU: Well then naturally I have to ask, what brings you back to the dance floor?

LU: Tell me about this new MOODRING track for DEQ magazine entitled “Roses?”

KT: I have always had a hard time talking about my own music. In the case of “Roses” I will just say it’s a collage. Back in the day I used to approach music like a lonely solo painter or sculptor when it came to my creative process. This is the first time I have ever specifically approached dance music intentionally like a collage artist. I feel like spending ‘85 to ‘95 alone on drum machines and synths producing solo stuff, and then spending ‘95 to 2017 as an instrumentalist with bands, altered the way I approach music production in general. Collaborations are good thing. Collages are a good thing. I used to think otherwise.

If you spend twenty some odd years with bands and actual instrumentalists, real players, collaborating on music, writing and arrangements I think you will eventually hear the impact it has on your electronic music productions. I have. It has broadened my horizons for sure. For instance, on “Roses” I used a sampler for the first time ever and there are words in the song. Twenty-five years ago I used to say silly things like “words get in the way of techno music.” I don’t feel that way anymore.

LU: Tell me about what your plans are for the future with dance music. Is this MOODRING project for DEQ a one off? Are you gonna leave us again and go silent for another twenty years?

KT: No not at all. I am just getting started. However, I am going to get back in the shallow end of the pool like a Detroit O.G. should. I gotta get used to the water man. I’ll use the kiddie ladder and the steps with a pina colada in one hand and a cigar in the other. I am taking it nice and slow getting back into the pool.

I will be releasing several projects under my MOODRING moniker this year and next. I have lots of material already recorded and ready to go. For starters I will be releasing my MOOODRING productions on my own Detroit Fusebox label across all digital media in the next several months. For right now, I am just extremely excited about being able to release my very first MOODRING track I have done in many years in my homie Vince Patricola’s DEQ magazine. I am grateful for the opportunity. It’s a good first step.

LU: We talked about your history in Detroit dance music and it goes pretty far back. After this long hiatus what are some of the big differences you see in dance music between then and now?

KT: It’s apples and oranges. You’re talking about two very different times and two very different things. The best way I could put it is like this. Everyone is still driving. It’s just that back in the day we all drove a Cadillac and there was only a handful of us between ‘85 and ‘95 producing Detroit techno. These days there are literally millions of DJ/producers and they are driving anything that moves. They are driving different kinds of cars, motorcycles, mopeds, scooters, helicopters, drones, and such. I mean they are still driving (or flying), but it’s just not a Cadillac man. Does that make sense? I can hear the difference. It’s still techno. It’s still music. It’s just that their means of transportation that they utilize to get from A to B have changed immensely. Therefore it sounds different, at least to me. I still prefer a Cadillac.

LU: Well then, where do you see the future of dance music in general?

KT: Detroit techno will never die. I helped lay the roots down for a form of music that will live forever. I am particularly proud to have been an early contributor to an art form that will literally live forever in one form or another. I must admit though that I do giggle when I hear house and techno music in commercials on TV. I think with techno basically becoming pop music, a new underground scene will emerge. You will find me there in the new underground operating in the shadows.

Want more DEQ? go to our website: www.detroiteq.com … Issues section. If you like what you see buy a print & vinyl comp at your local or on line store!!