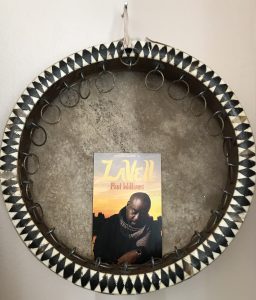 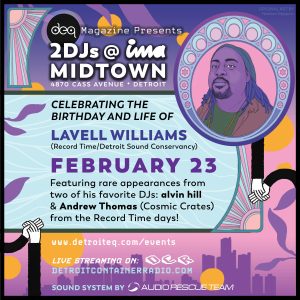 (Photo of LaVell’s memorial card in a tambourine.)

Quick Catch Up with alvin hill aka DJ ‘munk

It’s difficult to condense LaVell’s importance into a few sentences and we’ll dive deeper at a later time, but his legacy is larger than life. He was an integral community builder whether it was behind the counter at Record Time in Ferndale, his leadership role in the Detroit Sound Conservancy, or behind the microphone as a vocalist and poet, his warm presence was felt everywhere he went.  His customer service was always above and beyond and his fight for equality and change was strong. To say he is sorely missed is an understatement.

One of the many to be touched by LaVell’s impact was Alvin Hill. As a DJ, musician, educator, and community builder in his own right Hill was immediately drawn to LaVell’s positive outlook and welcoming demeanor.  Over time they became the best of friends.

Hill held many residencies as a DJ, most notably the Family Funktion (house, hip hop & acid jazz) night alongside Ron “Papa Ron” Olson, Jim Stone and Brian Gillespie but also in the early days of Motor Lounge (with Detroit Powertrain), Alvin’s, Buddha Lounge and he played many more events around town.

He created a label called Below the Surface, which gave more shine to artists like John Briggs (aka Zoetic who has tracks now with Osunlade and Atjazz) and Colin Zyskowski (Addon, ToraToraTora.) In addition, he was the director of music programs at Youthville Detroit.

Blessed with a set of eclectic golden ears, an experimental attitude and ‘munks deep and wide trunk of records he forged his musical life. Over the years, he learned that his own music appealed to professional dancers and began writing music for them. Performing with dancers on stages like the Kennedy Center and the Alvin Ailey Theater.

Currently, Hill resides in Ann Arbor working and teaching at U-M School of Music, Theatre & Dance where he is the Event and Instructional Technology manager and teaches an Intro to Electronic Music Production and Electronic Performance Practices, a course where students learn to perform with media. Most recently he has begun introducing modular synthesis into his practice. His passion to share music and teach technology to the next generation has never been stronger.

DEQ: Alvin! Thank you so much for taking the time to answer some questions for us. I found it difficult to summarize your journey in only a few paragraphs. Through the ups and downs, what kept you on your path? What sort of obstacles did you overcome?

AH: This could be an article unto itself. There have been a great deal of obstacles, one of the largest being the loss of both of my parents at a relatively young age. We were very close. However, I have also experienced a great deal of what might be categorized as “failures.” I don’t see them that way. I probably did when I was very young, but what they really are are opportunities for growth and I do my best to lean into and take advantage of those opportunities. And as to what helps keep me on that path, it is the gift of music that my parents gave me. It will always be with me.

DEQ: What was it that led you to choose your study at Dartmouth?

AH: It was a fluke. My father broke his wrist my senior year and the doctor he went to was a Dartmouth alum and did some recruiting for Dartmouth.

DEQ: Was it your time there that fed your desire to teach?

AH: No, my parents were both educators. My mom owned a small music school in Detroit and my dad was a principal in the Detroit School System. He also helped her teach at the Hill House of Music. It was a labor of love for them and it is for me.

DEQ: Would you tell us about the first piece you wrote for professional dancers. How did it happen?  Were you hooked at that point? How many pieces have you written since?

AH: I started writing music for dance when I was at Dartmouth. I was a popular DJ on campus and dancers would come to me to edit music for them. One time I said I could write an original piece if they liked and it just grew from there.

DEQ: When did your fellowship to study at U of M happen? Was that your entry into full time work there?

AH: I received their Non-Traditional Fellowship to study at U-M. They gave these to students like myself who had taken a good deal of time between undergrad and graduate work. For me it was 16 years.

DEQ: Modular synthesis. Ingrid got you into it from what I understand. Tell us how you got in?

AH: She gave me Cre8audio’s Nifty Bundle. It was a gateway drug…haha.

DEQ: Do you have “go to” modular pieces/programs people should absolutely have? What are some of the great resources out there?

AH: I think that there may be too many, but I also think that it is not necessarily the songs that already exist that remind me of him as much as the songs that are to come. I will hear a song that I have never heard before that is beautiful or bumpin’ or soulful and I will think of LaVell because those are times that I would have picked up my phone and called him or texted him to share. I miss that so much…

DEQ: What is the biggest trait of his that you carry with you?

AH: His inclusive and welcoming nature. LaVell had a way of cultivating a kind of community bubble wherever he was. You could feel that at Record Time, but you could also feel that when you saw him out and around town. All the misfits and quote normalpeople were all welcome and felt embraced when they were around him.

DEQ: How can we keep up to date with your projects/DJ sets, etc?