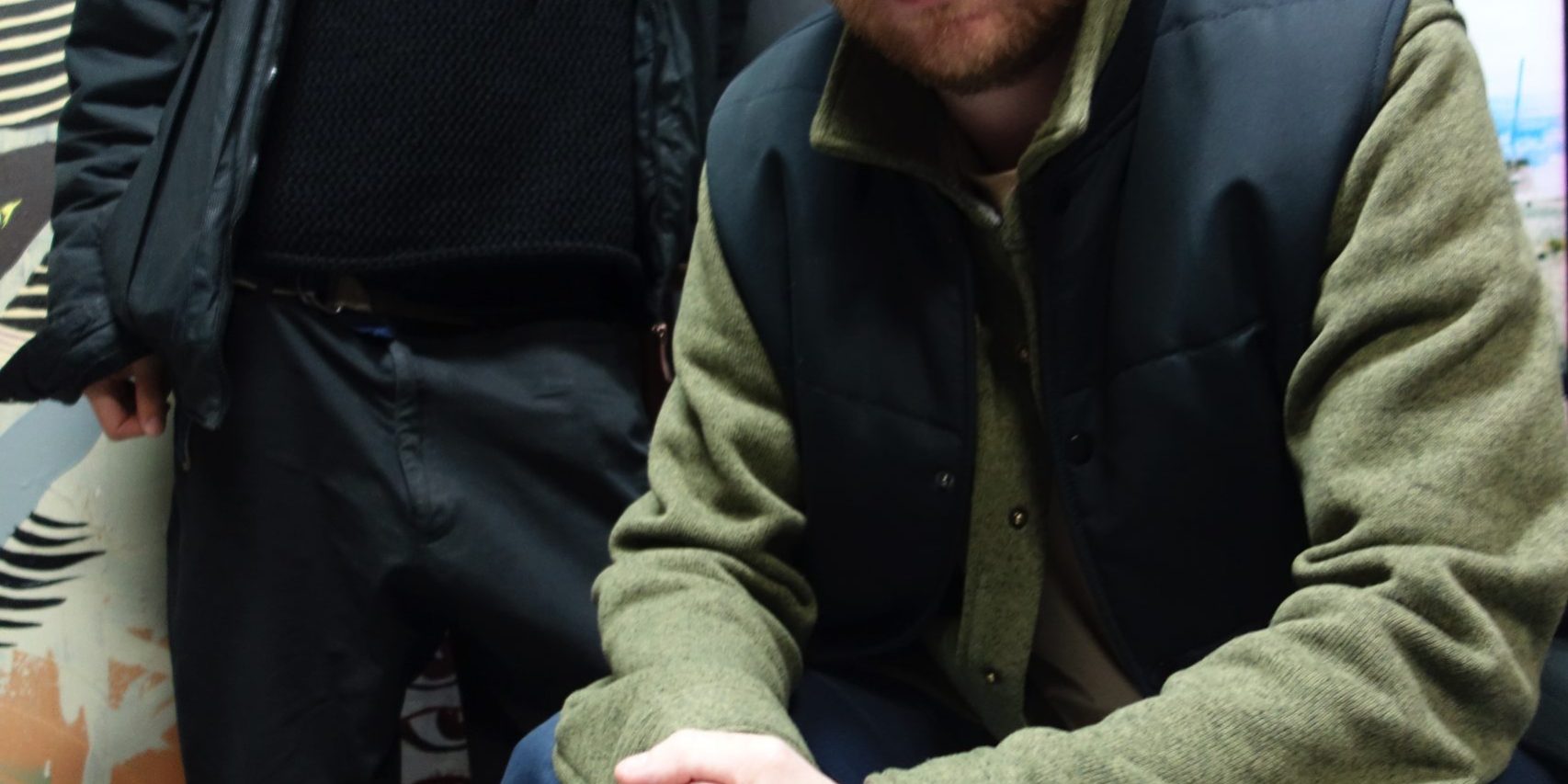 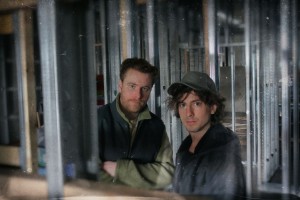 Mark Sanford and Daniel Woodhead are the Belmont Boys, an electronic music production duo with Canadian roots now living in Detroit. These guys are out there working it, living the dream. Sanford works with Aaron Siegel at a Detroit distribution company and label FIT Sound; Woodhead (who also uses the surnames Benjamin and BW) fronts the indie/dream pop project Moon King, which began preparing for a European tour soon after this interview took place in an upper flat on Belmont St. in Hamtramck.

Now you know everything. Well, no, not quite. Sanford and Woodhead were happy to open up to Detroit Electronic Quarterly and spill their stories about how each found ‘it’ in Detroit. Roll the tape:

DEQ: Let’s get personal: who are you guys and where do you come from?

Mark: I’m Mark Sandford. I was born in Canada, and grew up in the suburbs of Detroit. I went back to Canada after the 2004 election, went to school, worked in politics and hung around the DIY music scene in Montreal. Lived in Toronto, lived in San Francisco, moved to Hamtramck. All those places I was somehow involved in music stuff. I think I met Daniel when he was on the road in San Francisco. We kind of knew each other I guess, or knew a bunch of other people.

Daniel: Daniel BW, I’m also from Canada, from downtown Toronto. I moved to Detroit at the end of 2015. Yeah, I met Mark at a club (Rickshaw Stop) in San Francisco.

DEQ: What brought you to Detroit and what makes you stay?

Mark: I remember visiting friends in Detroit when I lived in California, driving along Hamtramck Drive near the GM plant, listening to some really good mix, and thinking – I should just be here. Luckily I had friends who could put me up for a bit, and I ended up finding a place and a job and all that. My apartment became this spot where bands and various music people from Montreal or Toronto would always crash when they played Detroit. That’s kind of how Daniel ended up staying at my place.

Daniel: I was on tour for pretty much all of 2015, and in the middle of that summer had a day off in Detroit. Some friends from Montreal were playing at this kind of festival at (the now closed after hours art space) Tires that night, so I decided to check it out, met some cool Detroit people, and a few months later I found myself living here. It seemed kind of like a paradise where I could do what I wanted to do, and hang out with new friends interested in the same music as me.

DEQ: Talk about the scenes in Toronto and Montreal.

Mark: Montreal reminds me of Detroit, and Toronto reminds me of NY or LA. I remember visiting Toronto from Montreal and seeing Toronto bands and producers perform, and it seemed so professional and glitzy with stage lights and what seemed to be outfits worn intentionally to impress. Everyone in Montreal dressed like bums haha. It was cool to see, but not what I was used to. Montreal and Detroit parties finish at 5 a.m. kind of thing, Toronto, to me, is like — you’re at the party until 2 and then you want to eat Chinese or Korean food, and there’s lots, and it’s really good. Daniel was a don in the Toronto music scene for a minute, he knew where the cool stuff was. I didn’t.

Daniel: Hah yeah I think Toronto is great, and it’s so close to Detroit, everyone should go up and play there. That’s something I’d like to help with, or see more of. I think the scene can seem a little more closed off, but it’s there if you dig deeper. Invisible City and venues like Bambi’s or Double Double Land are helping to push things forward. The potential is huge since there are so many people out every night, but keeping the music quality is the most important thing.

Mark: More people from Detroit should visit Toronto, though, that’s true. Two way street kind of thing, get them here, us there.

DEQ: What is similar and different about the Detroit music scene? Overall what’s different here?

Mark: There’s something about Detroit where the scene is pretty diverse in terms of age, I like that. Montreal has 4 or 5 colleges, everyone is young there. Every year there’s a new batch of young people wanting to party and make music, so lots of turnover. Detroit has a lot of history, which is one of the reasons I love it, because the people that made that history are out and about at record shops, stores, community meetings. People really dig in here, there’s a legacy you have to live up to.

Daniel: Yeah that’s one of the immediate things I’ve noticed, like especially in Montreal a lot of the people out at night are pretty young, or there’s some ageism involved when you’re older and out dancing at 5 a.m. Detroit has absolutely none of that, it’s great. Also the PA volume at parties in Detroit is kept lower than in a lot of bigger, more claustrophobic cities, and that’s a really good thing. If the music is good, you should listen, not destroy your ears.

DEQ: Mark, talk about what you do at FIT Sound with Aaron Siegel. How long have you worked there?

Mark: I’ve been working with Aaron at FIT for 2 going on 3 years. I manage the record distribution, taking orders, packing orders, shipping orders. I talk with stores and distributors every day. We’re on East Grand Blvd, a few blocks away from Theo Parrish and Sound Signature. Down the boulevard the other way is Dimitri Hegemann of Tresor’s building, and next to that is Underground Resistance at Submerge. Across the street from UR is KDJ’s building. It’s wild. It all happens here.

DEQ: Daniel, you also do a band project called Moon King. What’s that about?

Daniel: Yeah, I was doing the band for a couple years before moving here, and got to tour all over the place, play festivals and stuff. But after I moved here and started to become more immersed in dance music, the music I make for Moon King has shifted to be more of a disco/synth-pop type thing, very much influenced by the music I’ve heard at Freakish Pleasures parties, or in Scott Zacharias’ sets.

DEQ: Talk about the music. What are its inspirations and influences?

Mark: Daniel and I recorded our first tape in October 2016, right before the election. We were projecting election shit on the wall and making these weird jams. One year later in October 2017 we recorded again, and the political climate was obviously totally different. The first tape was airy and fun and chaotic, but the second tape was a lot darker and heavier. I spent the year since the election diving into some heavy stuff. Adam Curtis films, Mark Fisher books, Slavoj Žižek debates. The tracks themselves were very quick to form, and can’t really be recreated. I didn’t save anything onto the drum machines, the only thing we have is certain synth lines in the sampler. We would jam on something for 20 minutes then record straight to tape. It’s fun to do it that way because I know my own solo stuff I sit on forever and tweak and try to make perfect. Belmont Boys — don’t think about it, just do it, but make sure it sounds cool. That’s kind of where we were at with the tracks.

Daniel: Yeah, just a table full of gear. Usually we’d start out with one weird sound and make a loop out of it, then build a beat around that until it felt locked in, start the tape rolling and just jam.

DEQ: Tell us about a few of the tracks: what’s going on in there that we need to know?

Mark: ‘Ultramagnetic,’ the track on the DEQ record, is weird and fucked up and that’s why we chose it. All hardware, no computer. It sounds like a slug going for a walk along the train tracks between Hamtramck and the North End. I imagine slug type people listening to this. Not even sure if slugs walk, haha, but you know what I mean.

Daniel: We made about 16 tracks over a couple weeks while we were recording last year, they’re all pretty different, some of them really slow and fucked up sounding, a couple of them almost more like Kraut or ambient-y. Dunno if they’ll all be released, but I’d like for people to hear ‘em.

DEQ: What don’t we need to know: any secrets or any subliminal messages?

Mark: When we dubbed our first tape, for some reason it dubbed backwards, so most of the people who got the tapes heard all this weird backwards music. I heard one of the copies, it’s pretty fucked up. I think some people thought it was intentional. I kind of liked that. I ran into a person at a show who said their roommate figured out some workaround and got the tape to play regularly, as though there was something to be figured out, but then the tape started playing backwards again. The dude was really into the tape and he was talking to me like we’re mystics or something.

Daniel: There’s also some tiny bits that were left on the tapes from whatever jams were on there before. We don’t have that many tapes haha.

Mark: Yeah, good quality tapes on eBay got expensive in one year, so we use the same few high-bias tapes I got a few years ago. I forgot there are some artifacts from other sessions. Ghosts.

DEQ: What’s next for TBB? When’s the world tour?

Mark: We have to release this stuff somehow. We have loads of tracks. Hit me up.

Mark: No (laughter in background).

Daniel: Thanks for reading this whole thing.

for more www.detroiteq.com (issues icon for pdfs). Support by picking up a print copy & LP at your fave record store