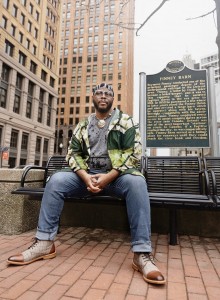 It was a happy ping. My computer is usually set to silent, but ding! A new track from John Briggs, aka Zoetic, arrived called “Tomography” in May 2018. The track sketch was the best I’ve heard from him in many years.

After the release of “Secrets of Ancestry” and “Reach” on Yoruba Soul (2006), “My Magic” featuring Paul Randolph on Sonar Kollektiv (2007), and several Zoetic remixes for other artists around that time, including Alton Miller’s “Possibilities” on R2 (2007), production output from Briggs’ studio came to a virtual standstill from 2010-2017. Although his silence was self-imposed, depression ran rampant in Detroit from 2006 to 2012, and Briggs acknowledges that he was not immune.

The foreclosure crisis was in full swing in Detroit. At the time, the economy was tanking, and people were leaving Michigan by the thousands. The automotive plants and their suppliers were closing or going overseas. The city’s services were on life-support as our former Mayor, Kwame Kilpatrick, was convicted of corruption. And Briggs struggled financially and emotionally after losing his day job during those times. “Very few were making money from music, and artists made even less. I was certainly at the bottom of that food chain,” he reflected.“Living a Bohemian lifestyle in a house we (Briggs and his life-partner) bought from the city in the North End, I was at least able to save some money before it all went to shit. I had very little to say artistically during that time. So outside a few things here and there, I withdrew.”

It was time, healing, reflection, and economics that allowed him to place his focus squarely on music again in 2018. However, it wasn’t just stability. Briggs spoke of two primary motivating factors: two relatively young friends passing away and a challenge posed by a co-worker in a similar artistic lull. She (his co-worker) is a visual artist who was not pushing herself either, and they challenged each other to get their work to the public eyes and ears. “I spent a lot of time depressed playing video games and watching movies before I found a new day-gig. After getting a new job, buying a new house, and specifically after those deaths, I began to realize I needed to create again seriously. This clarity and grounding were exactly what I needed.”

Embracing his newfound inspiration, Briggs began contributing mixes to Jason Hogans’  (Planet E, Third Ear, Really Nice Recordings) eclectic “Really Nice Trips” internet radio podcast (https://www.rewindit.fm/artist/Jason-Hogans). Following the investments in updating his studio, the pings started going out to a carefully selected list of people six months later, including the likes of Martin ‘Atjazz’ Iveson, who eventually released both “Tomography” and “Sketches of Spring” under his ATJAZZ imprint in November 2019. “There is no secret to how I reach established producers. I just sent them tracks I thought would work,” Briggs said calmly.

Briggs’ initial connection to Yoruba Soul was through a promoter (based in Dallas, Texas) who booked a party with Osunlade. He then asked if Briggs (Zoetic) would open with a live set. The success of that party was the impetus behind Briggs’ affiliation with Yoruba Soul and later collaborations with the promoter producing Soul Funktion parties in Detroit. “I’ve always tried to be involved in musical endeavors that I thought filled a void. Whether it was throwing parties or composing music, my motivation has always been in creating something unique.“

John’s latest tracks are mature, full-sounding dance tracks with hypnotic, enveloping, and mental teleportation properties. I feel like I’m on the dance floor and in the tropics simultaneously, or even outer space at times as his tracks are so perfectly matched to their respective label sounds.

Briggs’ latest submission to the DEQ Magazine compilation (17/18), “Beyond the Horizon (Redacted Mix)” – May 2020, is a nod to the late ’70s r&b with a modern spin. “I intended for some of the parts to be performed live in a studio (primarily bass, percussion, and some strings), but ultimately with no budget, I had to rely on my abilities. The inspiration came from the realms of Nile Rodgers (guitarist, best known as the producer-songwriter for the group Chic) and Patrice Rushen (superstar r&b) vocalist and jazz pianist.) I imagined the three of us producing a song together.”

A few songs from Caged Birds (slated for Spring/Summer 2022) were from a batch of partially tracked sessions paired with ideas conceived recently. To bring some of these ideas to life, he reached out to friends, family, and acquaintances. He ultimately enlisted the talents of Xavier Bonner (saxophone), Máté Jancsovics (Drums), Gabriel Poso (percussions), and Colton Weatherson (guitars). “It’s a mixture of things I love about music in general and not just the dance aspects. It’s electronic music with bits of funk, jazz, pop, shoegaze, etc., but undoubtedly danceable. I wanted to create something original with songs you could immerse yourself in comfortably day or night.”

“I’m very proud of this release but wish I could have worked with at least one singer. I get the job done in a ‘Blackbryds’ vocal kind of way, but I do miss that collaboration of writing with a singer in a band setting…eh, maybe not so much. My lifestyle now dictates that it’s simpler to swap WAV/AIFF files with collaborators, especially since most musicians and singers have very capable recording studio setups at home. I’m just grateful for the ability and privilege to express myself in this way and that Martin (Iveson) and ATJAZZ Records believe in my music. Not so much as Cagedwill be some colossal money-maker (although I’m not counting that out, Briggs laughs) but to sit alongside other quality recordings on his label.”

The Electrifyin’ Mojo’s radio shows were influential to Briggs as pre-teen hearing artists like Yellow Magic Orchestra, Kraftwerk, Visage, and Prince. “Everyone was trying to be like Prince, but the reality is no one can be like Prince (a total package of indisputable talent), except Prince. Mojo was a spark that lit a fire of imagination for me musically. His shows influenced me to dig deeper into music that wasn’t widely popular with Black audiences at the time. It all resulted in my discovery of post-punk, industrial, and noise bands. I already had a solid foundation of disco from my mom, the Motown sound from my dad, and jazz from my step-dad. Brent Bambary’s ‘Brave New Waves’ Canadian radio show I listened to religiously and Mike Holloran’s ‘Radios In Motion’ only fueled my passion for finding my voice in music.”

In the early to mid-’90s, Briggs blended ethnic music into his electronic compositions. Because he shared a studio with multiple musicians, there was always different gear for experimentation. The results birthed his short-lived band Marooned. Along with a rotation of singers: Kim Ballard, Renee Wade, Daphne Briggs (no relation), and musicians: Dennis Sheridan – percussion, Joe Hayden – bass, Tony Drake – fretless bass, performed locally, and he produced one Marooned self-released/titled album and several singles under its name. Two of their songs, “I’m Consumed” and “Daydreaming,” were featured on the summer 1998 and Fall 1998 CD samplers accompanying Alternative Press magazine’s issues. Lastly, recording a drum & bass interpretation of “Night Theme” for an Iggy Pop Tribute CD that Detroit promoter and label head Sue Summers compiled (Pop O.D. The Songs of Iggy Pop on Static Network & Records, 1998.) During the same time, Briggs was enamored by the emerging broken beat and hybrids of house and techno from Europe. In the mid to late 90s, artists like Metalheadz, Matthew Herbert, Bugz In The Attic, Seiji, Jazzanova, and 4 Hero (among others.)

A few years later, long-time DJ/producer Alvin Hill (aka DJ ‘munk), who held a residency at Foran’s Irish Pub (downtown Detroit, now the Grand Trunk Pub) and ran the label Below The Surface, heard that Briggs was making music. Briggs submitted tracks “Angry Blue Planet” and “Simple Text” for Hill’s Below The Surface compilation CD and later released ‘Love is All We Got’ (BTS 04) on vinyl in 2004. “Below The Surface was a co-op label where the artists controlled their paths and music. I wanted to bring some artists to the surface, and John was making some great music,” Hill said.

Fast forward to 2022, the sky is the limit for John with a beefed-up studio, advanced musicianship, and ninja production techniques. With a full-length release in the bag and an invitation to create for MightyReal/QueerDetroit (mrqd.org) – A Detroit art exhibition celebrating queer local artists, he can swing for the fences, and he’s hitting home runs. He’s still ever critical and selective because, well, he can do it his way and he can ping who he chooses.