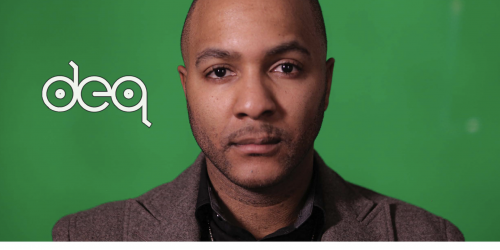 In the Key of D, Jon Dixon written by Dayna Himot and photos by Christopher Thorn (images here may appear a bit blurry)

DETROIT— Of the 139 square miles that make up the musical landscape of Detroit, there is chemistry amongst generations of mentor-mentee musicians, unlike any other city in the world.

He is a dedicated father, husband, jazz musician, independent record label owner and electronic music producer— he’s crushing negative stereotypes and opinions about millennials with a Detroit approach to mentoring musicians of all ages and backgrounds.

“One of the beautiful things that nobody really knows about Detroit is that there is this huge mentorship that goes on here across all genres, where people take you under their wing and a lot of them don’t want credit, which is the way it should be,” Dixon said.

He’s not afraid to attribute his success to his mentors, nor is he unwilling to share what he’s learned with the next generation. Dixon believes that no Detroit musician or member of the art community is solely responsible for his/her talent.

Dixon’s smile grows wide as he discusses his transformative relationship with mentors Mike Banks, the co-founder of Submerge and the late (trumpet player) Marcus Belgrave, Detroit’s beloved jazz musician and mentor, since 1963. Belgrave passed away on May 23, 2015.

“Mike always says I graduated from the UR Bootcamp and it was a boot camp in many ways, but once you graduate, he knows that you should be able to now go and get somebody else and show them, teach them, raise them musically, if you will, in the same manner, that ‘I’ve done with you,’” Dixon said.

People around the world expect a lot from musicians, but the demands on Detroit artists are tenfold. The complex elements of style, dedication, durability and sustainability of Detroit’s music scene span more than seven decades. It covers nearly every musical genre, from Gospel, blues, classical to jazz and techno.

“Once you step on the bandstand, they expect you to deliver a certain level of musicianship based only on the fact that you’re from Detroit,” Dixon said.

The mentor-mentee relationship is one of the ways Detroit retains its ability to deliver consistently.  Now, he too is passing it on. Dixon has taught a lot of people to play the piano; he insists that you must be passionate, caring and willing to share all that you know to see your students grow. He possesses a show don’t tell approach, to make a visual impression on his mentees to help them grow into themselves.

Dixon admits, he didn’t realize he was being groomed at a young age to be a mentor until later on in life. For instance, during his transition from jazz to playing keys in a church with a gospel choir, the church organ player told him something that didn’t make sense at the time, but now as his list of mentees and students grows, the organist’s words make complete sense.

“He told me— ‘when you (Dixon) play, you don’t play with any feeling,’ I’m thinking I’m playing the song how it is, what does that mean? But it’s life’s experiences, these things that you experience, rather, whether it’s failing a college course, or, you know, your cat died or something, I don’t have a cat, that’s an inside joke for somebody who reads this interview,” Dixon said.

In this scenario, the organist was pushing Dixon to use his instrument in a way he hadn’t used before. Dixon believes this can only happen when you see another person feeling it. Regardless of an individual’s relationship with the church, he offered the term “catching the Holy Ghost,” and shared here with DEQ Magazine, the only way to experience music on a different level truly is to listen to Gospel music live in a church.

“Gospel for a lot of us in Detroit, whether you go to church or not, you (Detroiters) grew up in the church, whether you wanted to go or not—and there’s always something you can learn and take away from that,” Dixon said.

He suggests for you to go to Greater Grace or Greater Emanuel in Detroit on any Sunday if you want to hear and see a new level of musicianship.

(He points to his ears) “You use these, your ears are the only muscle you use (in church), your ears and your eyes figure out,” Dixon said.

According to Dixon, pianist and shout musician Darius Quince featured on Dixon’s label, 4evr 4wrd 004, “Want It” released in 2019 with Dixon and Wajeed, is a true example of a church mentorship. Shout music is fast tempos, counter-rhythms frequently played by gospel musicians. It’s a common practice for young musicians to remain in church after the sermon and taught how to play an instrument.

“Someone showed him (Darius Quince) what they knew when he was, I think three or four years old and he picks it up like a sponge,” Dixon said.

In 1995 Dixon discovered We Live Hereby Pat Metheny. Two things happened to him after hearing this album:

After listening to Pat Metheny’s album, Dixon states, he couldn’t verbally explain what was happening to him. As a 5th grader, he was moved. Fast forward 20 years to a random car ride with British musician Goldie, after playing a festival in Croatia with Timeline. Dixon and Goldie randomly figured out they both loved Pat Metheny and they talk at least once a month about their projects and help guide each other out, the way good friends do for one another.

While Dixon was a freshman at Wayne State University, he and saxophonist De’ Sean Jones traded musical ideas in his mother’s attic, also known as “the coldest area in the winter and the hottest in the summer.” Jones and Dixon played music games that Dixon refers to as phrase wars.

These formative year improvisational relationships still permeate throughout Dixon’s call-and-response life in music. Playful exchanges with Jones and others are the key ingredients to the camaraderie that breeds radical live band experiences around the globe.

By 2011 Jones and Dixon had been invited to join the Underground Resistance’s Timeline, UR’s Hitech Jazz band.

D3 is another live band project outside of his label, it is entirely non-scripted, a shoot from the hip band feat.  Jon Dixon on keys and De’Sean Jones on saxophone. D3 is led on stage by the exceptional and incomparable beat master, percussionist and producer, Mark Flash.

“Mark is kind of like the driver and we’re in the backseat—wherever he goes, we have no choice but to follow and so whatever he plays, we use our ears,” Dixon said.

Approximately two years ago, Dixon and Marquis Johnson started a band called Room 131, named for their high school band room at The Detroit School for the Fine and Performing Arts. On May 20, the duo was slated to perform in Lyon France at A day with Jeff Mills, as Room 131 feat. De’Sean Jones (Johnson on drums, Dixon on keyboards and Jones on saxophone), however due to COVID-19 the event had to be rescheduled.

When it comes to music production, he says he only gets about 10% of what he would prefer to get out. He learned early on from Banks that a DJ’s record bag is like a toolbox, sometimes they need a hammer, a few bangers, sometimes they need some masking tape, etc. Because of this, Dixon tries to offer something for everyone. Dixon breaks down the 2018 release from 4evr 4wrd ‎– 4EVR-003, the Sampa EP.

“With SampaEP, I tried to have something for everyone. Derrick May likes A1 and the B1, whereas more of the jazzier people like 5 15 (A2) and people who like more eclectic music they like B2,” Dixon said.

On a trip to Portugal, Dixon kept singing Anita Baker’s, “Caught Up in the Rapture” three years before4EVR-002 “Fly Free” was made. He was able to finish the track in time for Al Ester to play at Movement 2016.

After its debut by Ester, everyone was asking for the release. Dixon said he made the track for fun and he never intended to release it. The version Ester had is not on the EP, it’s approximately five minutes long, too short for a dance track.

Under the advice of Banks, Dixon asked international DJ and historian John Collins (aka Papa John to the family) to produce an edit of “Fly Free.” Collins agreed that the original track wasn’t quite dancefloor-ready, it definitely didn’t highlight Dixon’s talents as a keyboard player.

Collins thinks Dixon is a brilliant keyboardist and producer— he’s watched Dixon morph into electronic music while maintaining his jazz roots and according to Collins, Detroit “needed to hear a Jon Dixon solo.”

When they went into the studio Collins had Dixon listen to a keyboard solo of one of Collin’s favorite house music tracks and said, “I need something like this” Dixon answered, “I got it.”

The keys you hear on “Fly Free” are what Dixon played in one take that day, and Papa John (Collins) knew it was absolutely perfect. Dixon wanted to re-record but Collins and Banks both agreed it was perfect and it was a done deal.

“I asked Mike Banks to listen to the track and in particular, Jon’s solo. Mike looked at me and said, ‘That’s it,’ I knew at this point if Mike said it was good. It was good. The next day Jon agreed to keep the solo. And the rest is history!” Collins said.

Dixon also loves receiving feedback in the studio from techno pioneer Carl Craig, and other notable Detroit producers, including Kenny Dixon Jr.—They are not related. However, Jon Dixon’s dad who’s quite the roller skater knows KDJ from Northland (Roller Rink.) Dixon grew up skating at Skateland, but his dad is the roller skater in the family.

In the spring of 2020, 4evr4wrd released its 5th EP, Times of Change, featuring artwork by DJ, producer, visual artist Rebecca Goldberg (Goldberg designed the album jacket and label for 4evr4wrd 002, 003 and shared the byline for 004).

Dixon says his wife and one-year-old son are his number one go-tos for everything he produces. Even though he didn’t get to release as much music as he would have preferred in 2019, the joy he feels watching his son grow up for his first year of life overrides any concerns about how much he’s producing. Dixon hopes to release three EPs in 2020, barring any production issues with pressing vinyl.

On the rapid growth and revitalization of Detroit, Dixon considers himself a foodie and is definitely happy to have more than five restaurants to choose from, but that doesn’t supersede his biggest fear.

“My biggest fear is in Detroit becoming a city that’s not at the forefront of music anymore,” Dixon said. “Imagine if Detroit is one grain of salt on a table and it’s the one place that people can always count on to go to for art and music that’s completely different. What would it be like if that grain of salt is no longer on the table and now we are the rest of the world and now people can’t even count on us, we get brushed off the map, and now there is no more Detroit sound?”

Dixon believes the world looks up to Detroit because of its musical history from Motown, gospel, techno, jazz, r&b, hip hop, rock n roll, to garage bands.  That’s why he’s adamant about teaching students and reminding himself via his mentors, that it’s his job to sound like him and not anyone else and finding as many students as possible to help is the best way to retain the culture of music in the D.