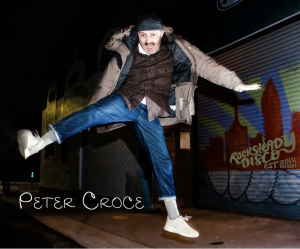 Peter Croce:Man, what a question to come out of the gate with… especially now that we’re finally maybe possibly coming out of the acute stages of the pandemic. All and all I’m doing quite well. The label is keeping super busy with Rocksteady Disco having over 27 vinyl releases now and MotorCity Wine with 12. We’ve got releases signed through 2023. Parties are coming back, which feels so good obviously. I learned a whole lot about myself, and dare I say the world, during the pandemic. I’m feeling clear-eyed and sober about what I should be doing in this life.

DA: Knowing you personally, I get the feeling that your label, Rocksteady Disco, is a pretty good extension of yourself as an artist. What is the vision for what you’re doing?

DA: So it sounds like you’re trying to encourage artists and listeners and dancers to just be themselves in a way. Do you also try to influence? Or do you think encouraging self-love and discovery are the primary functions of the music for you?

PC: Yeah that’s exactly right– we have everything we need inside of us and we’re loved and beautiful just the way we are. That’s a fairly iconoclastic notion in our current era, so I suppose I do try to influence, although until you asked me that question I think it’s been unconscious.

DA: So what made you want to start Rocksteady Disco?

PC:When I launched it in 2014 I wasn’t producing, but I was DJing a lot. People were sending me unreleased tunes, and I was listening to what my brother Topher Horn was working on and the edits that Lafleur was doing. The music that Rocksteady Disco is interested in is soulful, global, eclectic, but still rooted in the US dance music tradition. I noticed that there wasn’t really a label or hub for that sound, especially in Detroit, and especially for the younger folks pushing this sound so it all sprouted up organically, and naively.

DA: Sometimes naivete is the best way to start anything. It means you’re open to learn. What have you learned along the way?

PC: I remember when we put out our first 12” from Lafleur– Crosstalk International was my distributor and he basically took all 500 we pressed the first week. Then just a few years Crosstalk went out of business due to Brexit and other factors. So there went about $600 in my net-90 agreement with him. Many labels and pressing plants lost thousands though so I guess I got lucky.

There’s also the reality that this whole thing we do is show biz. It took me a while to realize this because I was fixated on our talent pool instead of the fact that we don’t really have a music industry here in Detroit. The industry that exists is an entertainment industry, not exactly an industry interested in putting forth quality music.

DA: Speaking of Detroit, I know that you grew up near the city. Did the D provide any specific musical background for you to develop around, or did that come later in life?

PC: My dad was a professional drummer when he was younger, and my mom has great taste and rhythm, so I grew up in a household that was playing a wide range of music. Also I’m lucky that I went to a school that valued jazz, so I was introduced to the bedrock of all good music through my public school jazz band teacher when I was 16 years old. So I guess through a sort of osmosis Detroit provided a musical background, simply because Detroit is a music city. I knew there were kids in my high school sneaking into parties in Detroit, but I never really went to a proper party until 2012. Looking back on it I’m really grateful that I got the music background without the party background.

DA: How did that affect your perspective of dance floor culture and DJ style later on when you are imbedded in party culture?

PC: It’s been liberating artistically. A lot of my all time favorite party records aren’t exactly “club tracks,” and a lot of the music I buy and play and re-edit aren’t really in the typical rave or club tradition. They’re just beautiful songs that (hopefully) make you want to dance or love on somebody.

DA: Speaking of edits, you’ve done some pretty well rinsed versions yourself. What drew you to editing, and has your view on editing and releasing changed at all as you’ve stepped deeper into the production realm?

PC: To me, editing is as much a part of DJing as digging for new music, beat matching, blending, programming, and gain staging. I think DJing is such a beautiful and misunderstood art form. [MotorCity Wine’s] David A-P and I talk a lot about how a great DJ can play literally any song, as long as they program it properly in their set. As a good DJ you have the discernment to know what will work for your dance floor and what will not. So by editing you’ve done something unexpected, and you’ve created something greater than the sum of its parts. I’ve had people come up to me after playing certain edits that they never imagined would be played on a dance floor—specifically Andi Hanley’s edit of Yello’s “Tied Up.” A dude came up to me and said that his estranged dad used to play the original version of “Tied Up” all the time when he was growing up. He went and called him the next day because he took it as a sign that he should get back in touch with him. What a gift to make the familiar unfamiliar and the unfamiliar familiar!

PC: “Revival” really was an unexpected turning point. At the time I had just moved to Chicago. I was struggling with distribution and having any money available for Rocksteady Disco, along with depression and anxiety that I struggle with. That record revived the label ironically enough and pushed it into the chapter it is in today. To have some of my favorite DJs in the world playing it and remixing it is a cherry on top. That being said I am working on more original productions, but they’re on the back burner due to the label and my DJing being my main priorities. But there will definitely be more original productions coming out sooner than later, including the remix on this DEQ release (issue 17 part 1) and my official remix of Dudu Tucci that came out back in January on Rocksteady Disco.

DA: And in a music culture that is constantly evolving its opinions, outlook, and values as a reflection of the culture around us, where is the real influence coming from right now?

PC: I read a recent interview with Quincy Jones where he says that there really isn’t a music industry anymore. For better or worse I think what we’re a part of is more of what Adorno and Horkheimer call the “culture industry.” The culture industry is not all that interested in music, despite how it looks on the surface. Whether people know it or not the opinions, outlook, and values being presented by those with power in this industry are not radical or genuine. They are marketing. And I think the only reason this is a shock to people is because we all think we’re “underground” (which is another fun marketing term), when in actuality we’re a pretty sizable economy. And where there’s a sizable economy there are people ready to capitalize and commodify.

DA: We’ll have to do a more in depth discussion on that another time I think! Wrapping up though, what’s on the horizon for both you and the label?

PC: The pandemic illuminated to me how fun it can be to say no and play fewer parties. I always look forward to 2nd Fridays at Temple Bar for my Más Profundo party with Blair French and 4th Sundays at MotorCity Wine for my Sunday Revival party. I hope 2022 has more outdoor parties, more vinyl only parties, more beach parties, and fewer people getting gravely sick.

Rocksteady Disco’s next release is Remixes, Rarities, & VIPs Vol. 2which has an Igor B remix of Moonlighter, Blair French remix of Sol Power All-Stars, Dazzle Drums remix of Eddie Logix, and Eddie Logix remix of Nois Land (which is a project I played guitar on with Blair and Todd Modes.) That’s a whole lot of names, but I think it speaks to how special the Rocksteady Disco family is. Keep an eye out for a Detroit exclusive white label at the local shops. Otherwise keep in touch with what we’re doing at rocksteadydisco.comand emaillist.rocksteadydisco.com.