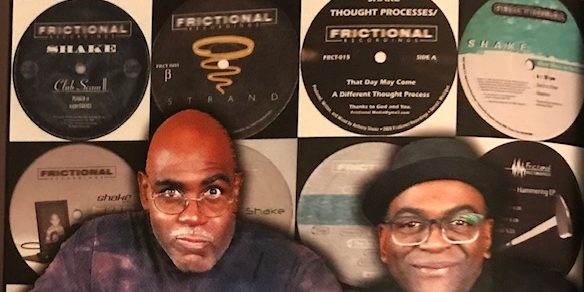 Getting two Detroit legendary producers, DJs Anthony “Shake” Shakir and Claude Young, together in Shake’s dining room to talk about the seminal label they started in 1994 together called Frictional was a surreal experience to say the least. There was a schoolboy type giddiness and enthusiasm alive in the room and laughter ricocheting off the walls. The energy from their synergy was truly a driving force, making the label large in the underground globally.

It was truly a hang on to your hat type experience with two global titans of Detroit electronic music going off on wild tangents about the who’s who of world’s electronic music producers, humming the basslines of tracks, talking about where samples came from, tour stories, shit talking and the like.

As our discussions progressed I could not help but think that our fun session at the dinner table was peek into how the music on this label began, except it was at Shake’s mom’s house on the Westside instead and there were a lot more people around.

The living room, in essence, was a lounge of sorts for nerd out sessions. Shake’s mom would make food and friends would kick it.  The guys from the group Strand also known as T.H.D (Brian Bonds, Brian Boyer and Kenneth “Kech” Harrington, Martin Bonds) were frequent visitors. There were lots of others. DJ extraordinaire Terrence Parker, Lenio Purry (who went on to produce tracks for Mary J Blige, Queen Latifah, Paulina Rubio), Kenneth “Kenny Flav” Dickerson (who produced tracks for the r&b groups Link, Silk. also Queen Latifah, Babyface and more), Marc (MK) and Scott Kinchen (to name a few) would also come by. All went on to do great things musically.

It wasn’t all lounging though. Track work was done in the back room studio. Gear, from instruments, drum machines and synthesizers to samplers and digital audio tape players (DAT) were back there. Almost always the setup would be different as they brought over new toys to experiment with. It was a great time in a young, Detroit underground scene.

Young, who worked feverishly on music in Shake’s back room as well (including his tracks on Frictional #1) in those early days, became friends with Shake in the early 90s when he was looking for promo vinyl at the Metroplex studio (Juan Atkins’ label.)  Young was looking for promotional records to play on his radio show and the two hit it off instantly.

“We started it (the label) as a friendship thing,” Young said. Shake added his famous tagline “I like records more than I like people…” They both were making their own tracks and they needed an outlet, thus Frictional was born.

The Begin EP was released in 1995 with Young taking one side and Shake taking the other. This was a definitive record for both producers. “March Into Darkness” was “quintessential Shake,” Young shouted out. “Your shit resonated.” Young’s tracks on the flip “Changing Factors” and “Second Experience” are also timeless classics.

Shake described Young’s tracks as “grandiose, clean and sci-fi” and Young called Shake’s fondness for redlining his recordings as “Shake levels” and that “people love that kind of dirty saturation.”  Shake laughed and added “turn the drum machine on and do your shit.”

All seventeen releases from 1995 to 2007 are true quality and books can be written about the experiences that came with each release. Although they paint a picture of Detroit at that time, the records definitely stand the test of time. In 2009, Rush Hour re-released select tracks on a compilation called Frictionalism.

Most records are Shakir’s production, but many other producers were featured including Strand, Lenio Purry, FBK (Kevin Kennedy), Scarrelly Moe (09) and Splits & Slits.

Shake’s favorite two Frictional tracks are “Like A Dream” and “Simpatico” (both on Songs for my Mother, FRCT 10.)  Simpatico is a party rocker while “Like a Dream”, as the name says, is spaced out, trippy and beautiful. Some additional fan favorites (aside from FRCT 01) are “Live For Friction” and “Breathe Deeper” (FRCT 02), “Electron Rider” (FRCT 04), “Frictionalized” (FRCT 013), “Detroit State of Mind” (FRCT 08), and Strand’s “Fourth & Go” (FRCT 012), but listen in and choose for yourselves.

Always appreciative of the support, Shake says “I just learn to say thank you…you like it, I love it… Nobody needs a record. It’s not food. It took me my whole life to learn that.”