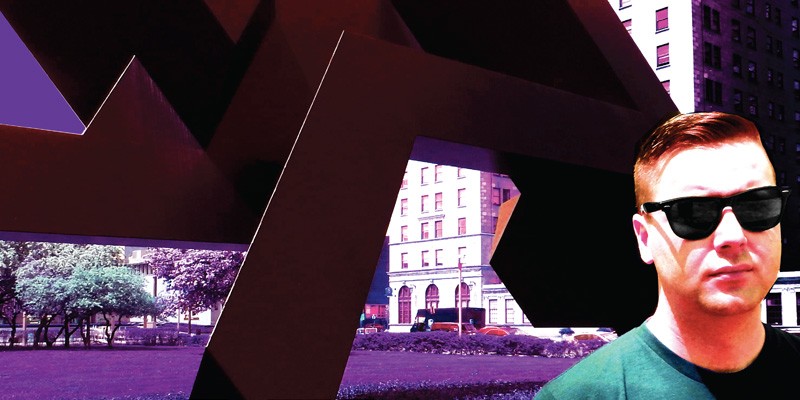 For those who don’t know, Jared Wilson has been a staple of the underground electronic music scene in form or fashion for the last two decades. Affectionately known as “Beard” by all who spent many hours arguing with him on the now-evaporated Detroit Luv message board, Wilson has been on a tear lately with a healthy stream of outstanding acid-informed music on his 7777 imprint as well as other labels around the globe. I took a few moments away from grading papers to speak with Mr. Wilson over some Sazerac Rye (Wilson is also a whiskey connoisseur).

RT: So, here we are. Just you and me. You’ve been busy lately. Normally you’re the kind of fellow that would just make an appearance here, a release there. What brought on this level of output?

JW: After the first couple 7777 releases I started getting more requests to make records and do remixes for other labels.  This all made it possible to have a steadier output and be in a position to release as I would like on 7777.

RT: I know you had many a label lining up at your door asking for material. What necessitated the need for 7777? Wouldn’t it have been just as easy to sign everything and let other people worry about the day-to-day stuff that normally induces ulcers in folks?

JW: Well that’s not really true.  Before I started 7777 I couldn’t get anyone interested to release my work outside of Blank Artists. With Blank Artists they were mainly doing digital releases and I prefer to make records. After Feed the Machine Records came to an end, I was at a point where I wanted to just focus on making music and not so much on releasing other people’s music. I had a lot of finished songs, some that make up the first two releases on 7777, one of the songs on the record I did for Dixon Avenue Basement Jams, and the LUXREC release.

I had shopped those tunes around Detroit and various labels and no one was interested. So I saved up some money and put out the first 7777 Record. I figured I would end up with boxes of unsold records, but it ended up selling out and Hardfloor used the TNT remix on their “Tales of the Unexpected 3” CD mix. At that time I never even thought of 7777 as a label. I just wanted to have at least one record of my own work, so when I was an old fart I wouldn’t regret never doing it. And when no one else was interested I just did it myself. Putting things out on your own and having other labels do it both have their pros and cons. Doing it yourself you have total control over the whole process, having other labels put your music out you don’t have to worry about all the legwork involved.

Currently, I just prefer to have everything on 7777. There are still a few labels I plan to do some releases for, but outside of them I really have no interest in other labels. It’s more for people who I am friends with. Same way with who I put out on 7777. For me to put something out on 7777, I’d want to know the person, know we have similar interests and philosophies on life. You could make the greatest music ever but if I can’t stand to be in the same room with you, I’m not going to have you do something for 7777. Running 7777 there are no ulcers. It’s not important to me to have a huge label that everyone knows about. I don’t go out and promote or network. I’m not trying to get everyone to talk about or write about it. The extent of my promotion is making a post on Facebook that a new record is out and where you can buy it. I just want to put out music I like, from people I like.

RT: Let’s rewind here a little bit. Let’s talk about your origins. The first time I remember ever hearing your music was through Feed The Machine. Talk a bit about that project/label/consortium and what role it played in your evolution as a musician.

Feed the Machine was started by my friend Adam Shirley and his friend Adam Sieczka (one half of Kill Memory Crash), with the first release by Adam Sieczka as Flak. After that release Adam Sieczka moved to Chicago and I stepped in to help Adam Shirley run the label. Adam and I were also making a lot of music together at the time as Obsolete. The focus for the label was just to release electronic music we both liked. We are both fans of all forms of electronic music, and at the time we were really into breakcore, jungle and just weird electronic stuff.

RT: You’re particularly finicky with what you listen to. And that’s just fine, Beard. But which artists out there are currently making you excited to listen to and enjoy music?

Just mainly been listening to jazz.  Hard bop, bop, swing. As far as records I’ve been playing I’ve loved all the Land of the Dance 12’s. Jerome Hill’s Super Rhythm Trax label has been excellent. Big fan of Andreas Gehm, pretty much buy every record he has out. The last few from Chris Moss Acid are great. Biggest Todd Osborn fan.

RT: What’s coming up on 7777? And don’t be ambiguous or I’m going to be much more visceral in my opening paragraph to this interview in the re-edit.

The second part to “Ghost Miners” has just come out. There will be a third release in the “Ghost Miners” series that has the ambient songs on it, and will include remixes by Fit Siegel, Andreas Gehm, and Brian Thrash.  There will be a four-track release by Downriver Psychic Divas that is influenced by nineties house, acid house, techno… But sounding current. After that nothing official but there will be another Downriver Psychic Divas release. We’ll be looking over the next month at what will be coming out for the end of year for 7777.