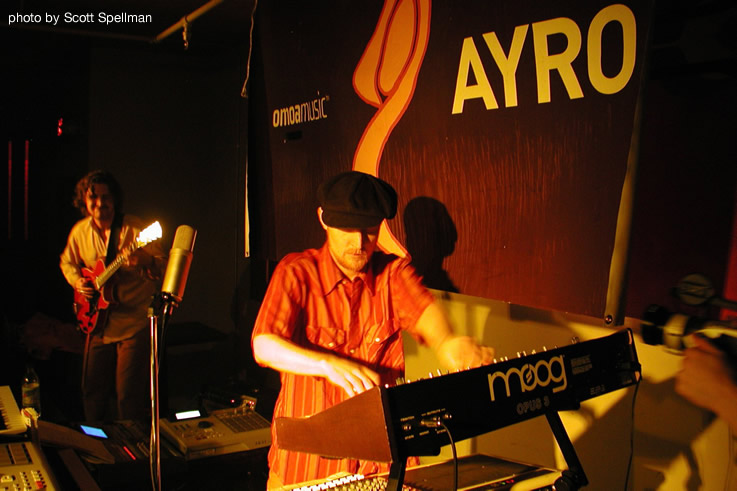 He’ll charm your pants off. He’ll rock your party. Ladies and gentlemen, boys and girls meet Jeremy Ellis a.k.a. Ayro. When this fabulous, skinny white boy with the big red fro steps out on stage in his powder blue Johnny Carson suit you’d better get ready for a show. Those who know will nod their heads in agreement.

Charisma, confidence and Ellis’ wonderful being emerge with every note. His all out musical assault shows no mercy on the happy crowd as they follow along on his electronic, soul laced rollercoaster ride with hands in the air. Neo-soul, hip hop, house, jazz, broken beat and funk, fast and slow, all happily fused together as he turns out hooks he makes up in his head freestyle on the fly. He stretches his keyboards and MPC (his drum machine sampler of choice) to their limits as he calls on them to set the beats free in rapid fashion. His sweet vocals make the experience even more meaningful. People compare his style to the sound of Stevie Wonder and Jamiroquai, but the output is truly Ellis.

Ellis started recording around 1998, about the time he became friends with John Arnold, who invited him to join the Detroit band Jazzhead. “John’s whole intention for Jazzhead was to creep jazz with electronic music. I was going through a “button pusher” hater phase then. I would hear a track and say ‘that’s the same loop over and over again. That bass line happens, like once and there’s that synth line that they must have played with one finger.’ I was such a hater. I knew I could do something better so easily. I bought some gear and started recording, but my tracks didn’t sound all that good…It took a long time to get all the right gear. When John got his MPC his tracks blew up. I was still stuck to my Groovebox, Juno and Rhodes keyboards. I bought an MPC to use as drums for tracks. Amy (his girlfriend) would write letters to me and I made songs in response. They were the good first songs I ever did, but the production was just okay.”

Another influence on Ellis was Matt Chicoine (Recloose). “During Jazzhead shows we would have DJs play in between sets. I remember taking a break in the back room at Alvin’s (venue). I heard this super sick drum and bass track coming out of the system. I was really into that style at the time, but this was different. It had an idea and was so funky. This crazy sax jazz shit came flying in. John and I rushed to find out what it was. It was Matt’s track on Planet E and that’s when I first met him. Matt asked me to come over to his house to play keys on some stuff from time to time and hung out casually. About three years later, he told me he was thinking starting a label with another partner (Jani Anderson, Omoamusic). I gave him ‘Let This’ and they loved it.”

Ellis’ first full-length album Electriclovefunk was released on the Omoamusic label in 2002. “It took me seven months. It was more of a process than I ever thought it would be. I’m a perfectionist. I tried to cover every base I could on that record. I still want to go back and change, like everything. It (the album) represented a lot for me. I felt I had to play jazz, some drum and bass, some Squarepusherness and the soul jam. I had to do it all! I have this strange competitive brother spirit with the world… with people who make music.” Ellis then laughed and said, “I need to flex and announce my dominance with authority.” Then we both cracked up. Ellis is a piece of work.

Shortly after the Electriclovefunk release, Ellis began work on his next album “Lotus Blooms” which was released this past February on Ubiquity records. “I hooked up with Ubiquity when I was roommates with John Arnold. I was making my first album at the time. It was also before every single human had a cell phone and we had a group telephone line at the house. Andrew Jarvis (Ubiquity) would call us to make tracks for his label, but I was completely consumed in finishing the Ayro album. In the down time after the first album was finished, I sang on some of John Arnold’s and John Beltran’s tracks for Ubiquity. I realized that they had an official label. Checks on time and what not. It is a proper label. Their Publicist Aaron Michaelson is the shit. They get the word out to the media very well and the records get in stores, half the battle, ya know?“

Right around that time, Ellis played at the San Sebastian Street Festival in San Juan, Puerto Rico. “Three words. Oh. My. God. Imagine 60,000 of the most rhythmic people you’ll ever see playing drums, singing, dancing and celebrating! It was like Mardi Gras, but with people who could REALLY DANCE. The people there were interested in fusing traditional Puerto Rican music with West London and Detroit Electronic flavors. As soon as I could, I wanted to move there and record. Ubiquity wanted me to do a full length for them and this seemed like the perfect opportunity. It was like a paid vacation of sorts.”

But like most vacations, shit happens. “We were hung over from being in Puerto Rico for two months and I had a couple of shows to play at the Winter Music Conference in Miami. I played the shows. The compounding hangovers were really killing me. In this state I wound up leaving THEE bag with my laptop, Amy’s laptop, $1500 (the rest of Ellis’ record advance), and nearly all of our international documentation. Worst of all the Polaroids, ya know, of our cat that died the previous summer. We realized the bag was missing within ten minutes and asked the building security to retrieve it. That’s when the security guard stole it. The tracking for the whole Lotus Blooms album was backed up in both laptops. After all that, painful as it was, I regrouped while living at my parents’ house and began making tracks. I was so humbled by having the album stolen. I felt that it was a sign to dig into my Detroit roots, funk, jazz and what not. As I kept practicing the songs and rhythms I learned in San Juan, along with my diet of classical and jazz, the Puerto Rican flavor crept back into the mix in more of an organic fashion. After moving to the east side of Detroit, close to the river, I finished up the first single, Lotus Blooms. The album began to take shape and flowed naturally from there. It’s a blend of most of my influences up to now.”

In addition to recording and touring, Ellis is making a positive statement with his Third Party Candidate events. Brilliantly using a political theme, he and partner in crime John Arnold teamed up to throw three parties on the third Fridays in January (The Primary), February (the Recount) and March 2005 (the Inauguration). All three events were huge successes. They were continuous four-hour freestyle jam sessions with Ellis, Arnold and other skilled DJs in different genres, percussionists, vocalists, MCs all together on stage expressing their musical freedom. The focus was the musicianship. Ellis’ fast fingers and elbows were highlights of the show. The air was electric. You never really knew what to expect at any given moment, but heads would bob and the people danced in the whole building. “We definitely turned some heads with those parties. We crossed a lot of different genres of music and exposed different crowds to new sounds.”

Ellis and Arnold plan to elevate the Third Party Candidate parties to another level. They want to further an idea called “freethink”. This is a concept where people can simultaneously exchange ideas openly, utilizing technology and the human spirit. “Third Party is not just about us being free on stage. I want it to be more like a gathering of ideas as well. People could actually bring ideas, for the city of Detroit in particular, to the table. For example, this is the way we can clean up this particular block. People could think of little plans for two or three people to do. We can sign people up and hopefully get a few things done. Maybe even make a some friends out of it.” After he said that, I was motivated to grab my rake and a garbage bag right away. I think it’s going to take a minute to put together, but I’m convinced we can gather a small army when the time comes.

Societal issues are very important to Ellis. “It’s not ALL about the money, like television says,” he proclaimed. “I was flipping between MTV and VH1 and they had some rapper’s 15 year old daughter flown in on a helicopter for her 15th birthday. They were focusing in on this massive luxury item and it cost like $30,000 to happen. That money could have been better spent…feeding her block for a year, ya know? MTV had on some other crap rapper that just got his record deal. He had some $250,000 necklace on that was spinning! Spinning, right! This guy “keepin’ it real” spent half his life’s fortune on a necklace. Pointless. We need to say something more important to our youth about how to fish, not just glorifying the fish. Ya know what I mean? It seems so obvious that the goal is to attain that wealth, that knowledge and share it with people who need it the most, the kids on your old block- right?”

Ellis is thinking about a better society. He’s an amazing producer. He’s a performer with a friendly sort of arrogance. “I know where I’m going to be. I’ve known since I was five years old. I’m going to be one of the greatest musicians alive in my lifetime. Top twenty at least. Let’s have a showcase.”