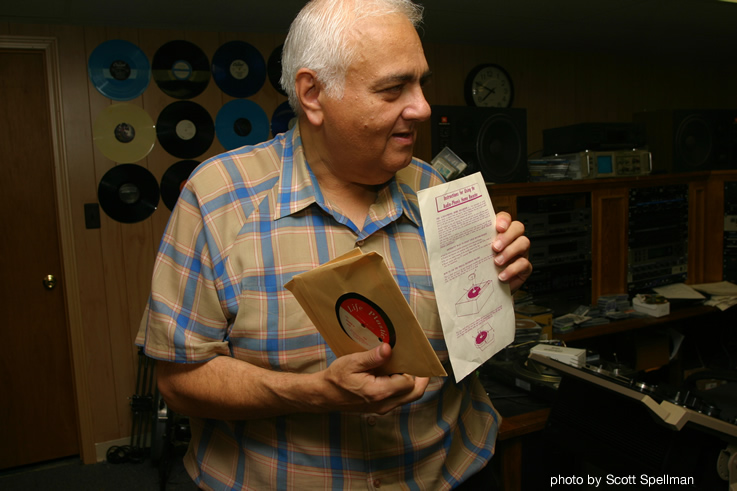 Ron Murphy, The master vinyl cutter with the magic touch

If you look closely at many of the great records that came (and are coming) out of Detroit, you may notice a tiny NSC with a circle around it right near the label. That is the mark of Detroit’s greatest cutter, Ron Murphy and his company Sound Enterprises (formerly known as National Sound Corporation or NSC.) He’s a craftsman with a cutting lathe, carving with pride the master discs from which countless copies follow (mastering). He was there from the very start, making Detroit techno legends sound like the legends they are on their albums heard in bedrooms, basements and parties everywhere! He continues to work with several prominent artists from around the world, still many from Detroit.

It’s safe to say Ron is a vinyl fanatic. His fascination began at a young age when his mother pulled the crank Victrola (with the giant horn) out of the closet and dropped the needle on George Gershwin’s “Rhapsody in Blue.” “My mother loved music and always had it on. I didn’t realize they were playing records. I used to think, man they had a lot of people at that radio station! Here comes so and so, they’d sing. I thought it was live! When she took that record off, I held it in my hand for about an hour trying to figure out how it worked. From that day on it stuck in my mind.”

In January of 1959, Ron bought Motown’s first release Marv Johnson’s “Come to Me” (Tamla 101) and others that year. “At age 12, I was analyzing records thinking this one is louder than that one. I looked at margins at the end, run in grooves, the spacing of the record, the label placement and more. This is kind of strange, but in my mind one record was better than the other. I got a perception in my mind which was good and which was bad.”

Ron’s first equipment purchase came from an ad in the back of a comic book in that year as well. “The ad said you could record your voice at home. Everything you need for only $6.98. I saved my money and got that thing. It had a plastic horn, steel needle, cardboard records, and little plastic tracking disc that hooked up to a turntable. You’d scream into the horn and next to nothing would come out on playback! I knew then it was going to cost me more than $6.98!” He laughs, “I thought I was getting away cheap!”

He persisted, worked as a sound engineer in studios around Detroit (started in 1966), acquired his own gear and by 1967 came up with a great cutting system that could master records, but it was mono. “I was a day late and a dollar short on that one. Stereo was coming in about 1968-69 on rock-n-roll 45s somewhat, but engineers really didn’t know how to use the equipment and blew their amplifiers… I learned!”

Ron continued working as a sound engineer in studios until 1972. “When Motown moved out, it seemed like everything went down. It had been tapering off for a couple of years…everything seemed to end with that. I figured I’d have to build my own studio to give myself a job, but what would that mean? Would I get any business anyway? I decided to get into insurance. I went to college, worked for and started my own insurance agency until almost 1988.”

Therein he met his partner Steve Martel, an eccentric, wealthy man from Chicago who actively collected vinyl, cutting equipment, jukeboxes, and more. When he came to Detroit to buy records, someone recommended he call Ron at his agency. Ron sold his 2 cutting systems to Steve over time when the financial outlook for cutting vinyl wasn’t all that great. Steve would still need help with records for his jukeboxes though. “My partner was a juke box nut, he had one in every room of his house! Everything but the bathroom! He gave three restaurants that he ate at regularly jukeboxes for free if he could put six of the records he liked on them. He would bring me his LP’s to put certain tracks on seven-inch records to play in the boxes. So I’d start off cutting. He laughed and said ‘don’t you see you have the touch? I’m too clumsy to do that.’ I never realized it before. There is a touch to doing this, the way you handle the equipment. Liking music has nothing to do with it. The question is, do you like physically making records?”

Ron and Steve later started National Sound, an oldies music store in Detroit (on Warren and Southfield Roads.) “I found out a (vinyl cutting) lathe was available. We thought we’d buy it just to cut records for people’s jukeboxes. There was no business for cutting masters… particularly in Detroit at that time. We bought it and eventually put it into the back window of the store.” Then Ron looked up and delivered the goods. “As the story has been told many times, in about 1989 Juan Atkins and Derrick May came in looking for old records. Most people in the store didn’t know what ‘that contraption’ was, but Derrick and Juan did. Derrick asked if I could cut a dub.” He came back the next day to listen to it. “I remember Derrick jumping up and down afterwards saying ‘now that’s the way a damn record should sound!’ Being in Detroit, working as an engineer, listening to Motown in the mid ‘60’s, I knew that the bass was important on a record. If it didn’t have that bottom end it wasn’t good to me. The bottom is a substantial part of Motown records. I did bring his bottom up where the other guy probably cut it the way it was, which is the way you usually do things but I take chances sometimes to make it sound better.”

That interest paid off big dividends for Ron. “Juan Atkins came back the following day. We tried to cut him one but the amp blew up. It wouldn’t take all that bottom. A tech and I worked on it morning and night. Finally we got it right and the guys came in.” Yes, indeed they did and still do. Ritchie Hawtin came in with Derrick May. Jeff Mills and Mike Banks came in bit later ready to start Underground Resistance. Many followed.

Ron eventually closed the record store, but the good word about NSC’s capabilities spread like wildfire. In 1994 he was dubbed the “hottest cutter in the country.” He wanted the artists’ records to be unique as possible. He encouraged Ritchie Hawtin to write “words of wisdom”, as Ron called it, on the early vinyl. He installed continuous loop grooves for Jeff Mills’ “Rings of Saturn” (the vinyl actually had giant spaces on it to make it resemble the planet.) He figured out how to groove two tracks into one side of a record for Underground Resistance. He even sold Basic Channel one of his old Ampex recorders to make they could get more source noise. Talk about going above and beyond!

“My job is to make the master record to be plated”, said Ron. Plating is the process where a mold is created from the master vinyl to stamp out each record at the pressing plant. He continued, “It is not to master the sound, per se. I may touch it up. Some engineers will only cut it just the way you gave it to them. It does start with a good mix though.”

Ron continues his business of cutting master records at his studio in Westland. He’s doing more hip hop and booty these days, but still works with a majority of house and techno producers. He is an inspiration, showing us that care, creativity, knowledge, and timing can help provide work for life, especially when the love is there!