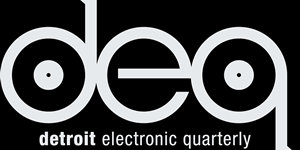 A meeting. A spark. An I-can’t-believe-this moment. 1315 Broadway? On Movement weekend? Really? And the flames rise. A concept. Fingers flying across computer keys. Facebook event. Phone calls. Texts. Spread the word. Favors called in. Event goes off. Total success. Ten days to one day. Saturday, May 23, 2015.

Ten days earlier. We (DEQ magazine) host a night at Urban Bean Company on Thursday nights where producers play their own tracks and share their musical journey on an amazing Audio Rescue Team sound system. Plugs aside, on May 14 our guest Bill Beaver comes with his friend Jeremy Grace. Jeremy is a happy, hard-working, generous fellah with stories to spin and love for the electronic music scene.

As we meet, Jeremy pulls down his giant, tear-drop sunglasses and said to me: “You are Shortround, right? I love your magazine. I still have the one with Jeremy Ellis on the cover.” Considering my last issue was in 2006, I knew he was in tune. As it turns out, he does a lot of plumbing work for Bert’s in Eastern Market and 1315 Broadway, the latter was one of the homes of the legendary Music Institute.

1315 Broadway is leased by friend of our scene Bert Dearing and is (at this moment) rarely open. Jeremy found out that the lease for this building would be up soon and may not be renewed. The landscape changes quickly with buildings being purchased, so Jeremy asked Bert if he could use the club to hold one last party over Movement weekend. Who knows? It might become a TGI Friday’s.

Jeremy told me to come by the spot on Saturday to check out his own sound system. I’m thinking “Is this guy for real?” People talk the talk a lot here, but that night we were walking the walk. Spinning records at 2AM with Jeremy, his friend Nick and Bill Beaver. Then Jeremy asked if I would promote and book the talent for the Saturday party during Movement. I said, “You do know that the event is THIS Saturday, right?” The next question, “Is there a budget?” He pulls down his shades and says “not really.” I said, “Let’s do it.”

The next day my head was spinning with possible lineup scenarios and oh-my-God thoughts. I went to MotorCity Wine, the place to go on Sunday nights. As it so happens, former Music Institute resident Alton Miller was there. I told him about the opportunity. He said to me “Man, I haven’t been in that building since we took the sound system out of there.” His eyes welled up a bit when I asked if he would bless us with a set in his old stomping grounds.

We got Alton to play, Billy Beaver is in (as always) and I will play a bit. Good friend and Cymatic Soles founder, and house dancer Gehrik Mohr tells me his friend DJ Noey Lopez is flying in from Texas to come to the festival and the dancers all like him. So he’s in. Designer Joshua Adams whipped out a flier on a moment’s notice and it was on! It was electric to say the least.

As the festival ended and people started filing in, Noey played a fantastic set. Sprinkle in some Billy Love freestyle. The dancers loved it (I can’t thank Gehrik and Noey enough.) Alton, booked to play from 1AM to 2AM, played until 5am and showed us how much he loved that space with the music he chose. Jeremy hosted the event and busted his ass to make it all happen.

A night to remember came from a meeting. A spark. So did this magazine. That’s another story. Enjoy! And thank you for paying attention.