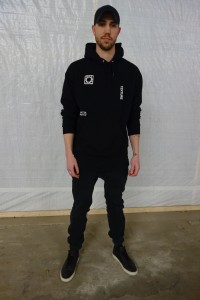 What comes to mind when you see or hear the word texture?

It could mean what’s on the surface, like threads or strands of fabric. Or it might be something deeper, below the surface, a blending of sounds, senses and human interactions.

In Detroit, Texture means all of the above, with one important distinction: it’s also an ongoing dance party project with local, regional and international connections.

Founder Jacob Park, an engineer by training, says he got the idea when he was living in Germany in 2014, ‘researching surface finishes for water jet cutting techniques, and working on scanning and analyzing surfaces.’

So, aha: that’s the surface piece of the Texture puzzle. But there’s more: the group’s first event was two years later at Marble Bar, a Sunday party Park says ‘started at 7 a.m. and went until midnight. Pretty ambitious for the first go.’

No doubt some interesting sonic and human interactions took place that long day and in subsequent events over the past three years.

Park, who is in his mid-20s and grew up in Detroit’s northern suburbs, met with DEQ to chat about the origins of Texture, its present and its future.

He shares a large studio with 11 artists and other creatives in a building in Detroit’s North End. Some of them walk through as we talk. Art objects in progress are set against the wall. It’s a comfortable, friendly, renovated industrial space, ideal for our conversation about Texture and techno and what’s next for both in Detroit.

We begin by talking about Detroit’s strengths and weaknesses – often two sides of the same coin – and how people who do creative work here persevere in an environment that has historically had more producers than consumers. Or as Park puts it: ‘there’s too many venues and not enough people to fill them.’

WW: So it’s a bodies problem? Build it and we still won’t have enough to pack the rooms?

JP: It’s not just about buildings and bodies, Park says, ‘but more about education. In Amsterdam and Berlin, by 21-22 years old you have the social etiquette and developed taste by then to know what’s going on. We have a lack of interest here in this underground niche culture. It’s a major challenge.’

WW: So how can Texture, or any dance music event, open doors and help break through invisible barriers of etiquette and taste?

JP: ‘We see Texture as an experiment reaching for new ideas, we try to meld those together with art, music and space,’ he says. ‘It’s also fun. Nightlife is supposed to be fun. We don’t have what Amsterdam, Berlin or London have on the front end, where people start going out early (in their lives). They lean farther into popular culture (in those places) than we do in the U.S.’

WW: As we talk we agree that for creative and social scenes to grow in healthy ways it’s important to build friendships and partnerships with like-minded people in other cities. Texture has in fact already formed relationships with artists and promoters in Berlin and Montreal. How did you make that happen, Jacob?

JP: ‘I lived in Germany for a few months and made some contacts and just kept up with the people I met over there. They introduced me to their friends, and vice versa,’ he says. ‘First time I played out (as a DJ) in Germany was in 2017 for a crew in Cologne that I originally met when I was living there.’

It actually sounds simple: open up the night with people and possibilities, share common interests in music and real life community values, keep communication channels moving forward, plant the seeds for growth and nurture them. Month after month. Year after year. That’s what social innovation and sustainable creative industry should be about.

WW: Are there any recent examples of this being done, Jacob? What has worked in Detroit to break down barriers?

JP: ‘The last real late night spot was Grenadier. It was a common ground for everyone, no matter what crew you rolled in or whatever, everyone was there and it was chill,” Park says. ‘That’s missing right now. It takes a unique set of circumstances for something like that to exist – a lot of people are trying to make things happen but it’s easy for it to feel forced.’

WW: How do you produce events that attract people and keeps them coming back for more?

JP: Create something that people want to go to. Simple. You cannot do Grenadier (which closed in 2017) again – make another one,’ Park says. ‘It’s easy to get a space and do a party; hard to do what Grenadier did: without ego, building it in ways people will never see by promoting people, culture, spaces – not promoters promoting themselves.’

WW: Texture is also about building it by altering the physical environment at its events, thanks to light installations by Patrick Ethen and collaborations with east side art space and talent agency Playground Detroit.

The final words are yours, Jacob: what does it take to steer Detroit party culture into an even better, deeper – and simpler – future?

JP: ‘Show it, do it, don’t explain it. Just embody this Detroit techno thing,’ he says. ‘Just be you. The artists that started doing it (in the 1980s and 1990s) gave their soul to something that didn’t exist. You don’t want to compare yourself to these guys because they were just trying to do them.

‘We just want to dance as long as we like, play as late as we like, and do what we like. It’s just dance music, nothing more than that: we don’t need to get academic in a fake-ass way. The greatest statement you can make when everyone is going to Berlin is to do it in your city instead. It’s the most fucking punk thing you can do.’