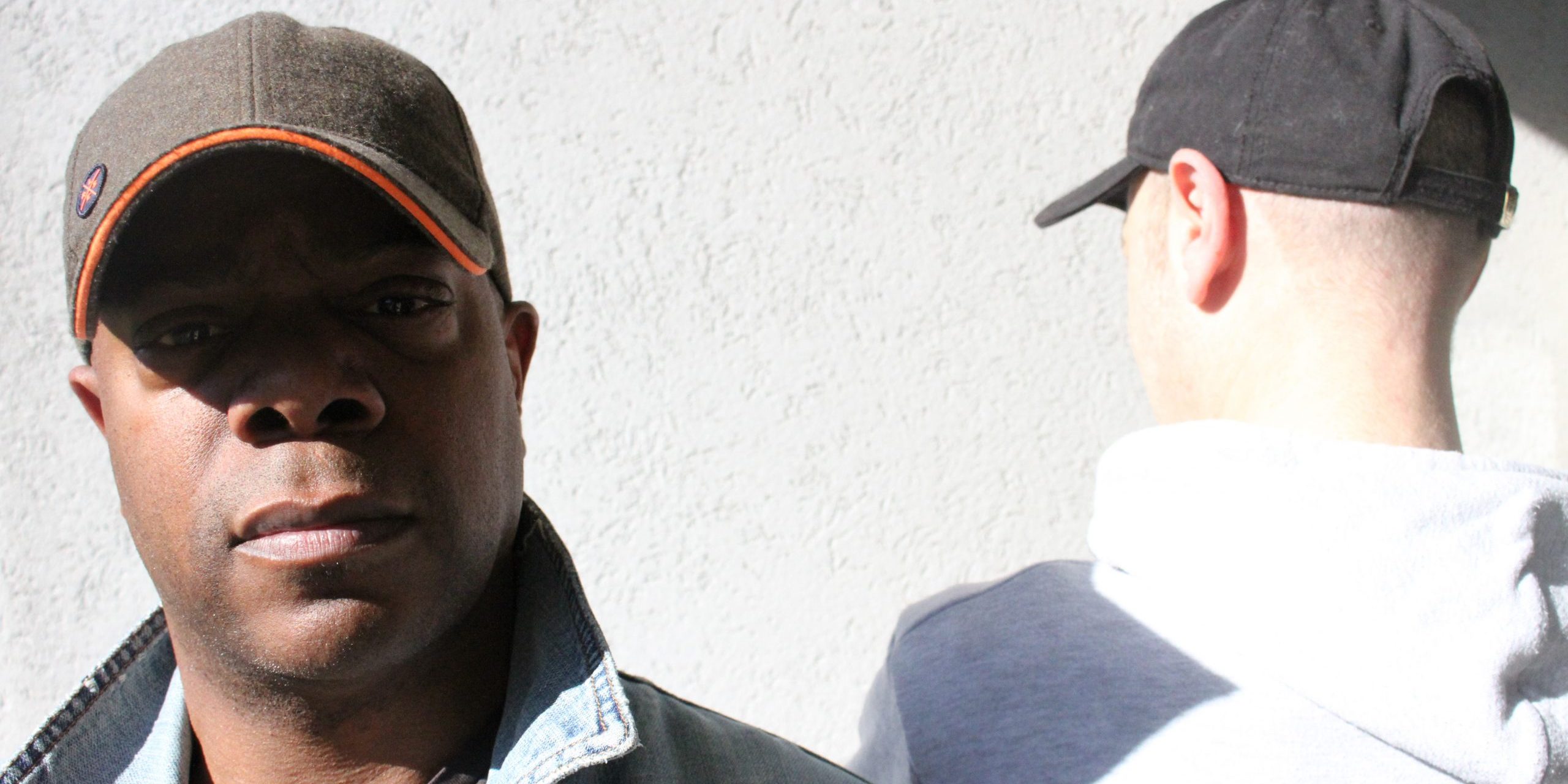 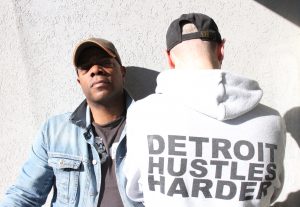 I think you’ll agree that getting into the music business is a true labor of love. It’s living on the edge, hours and hours of trial and error, listening, learning, promoting, hoping, praying, practicing on repeat. I think you’ll also agree that for most of us, the breakthrough can only take you so far and constant re-imagining is essential. We always need to be looking to the future to not only grow creatively, but to attract new people to the fan base.

The Techmarine Bottom Feeders are the duo of Paris the Black Fu (of the Detroit Grand PuBahs) and Luxus Varta (Emeric Di Paolo.) Both gentlemen have solo careers in music, however they joined forces in 2019 for their first EP on EPM Music called The Vision and followed up in 2020 with The Proud Traitor.

DEQ: Hey Guys! Congrats on all the success with Techmarine Bottom Feeders! How did you both meet?

Paris The Black FU: Hey Yo! Thanks for that, we’re really excited about the project.   We met just after I moved to Geneva.  I was wandering around seeing what was available in the new neighborhood.  Luxus Varta was working at a CD/DVD shop at the time, I walked in and we just hit it off from the very beginning.  We started talking music and movies and what have you and our friendship took off from there.  I’m not sure when we started actually working together but I think we had a good foundation musically speaking and a mutual respect for one another that allowed for artistic expression.

Luxus Varta: Hey, thanks for the invitation, nice to be part of the record!  I remember it was around 2006, just before the third album of Detroit Grand PuBahs ‘Nuttin’ Butt Funk’.  Paris was looking for a drummer to play on some tracks.

DEQ:Do you both have specific roles in the duo?

Paris The Black FU: Kinda, sorta, but not really.  Either one of us starts a sketch of a track and sends it to the other and if that person feels they can add something and does, then that person sends it back to the first person, if the first person likes what the second person did then the person gives the OK and receives the files from the second person.  Then the first person continues to work, if necessary.  I usually get all of the files in either case because I’m the one who usually mixes the tracks… so I guess this is where the “kinda sorta” comes in since I mix.  Does that make sense?

Luxus Varta: Yes that makes sense to me 🙂  Paris has got the right ears to mix TBF, his electro background is essential for the sound of the project.

DEQ: What is the story behind TBF?

Paris The Black FU: I had the idea while living in Detroit before the PuBahs formed.  I’ve always had the thought of the world being ruined by scientists tampering with things they really don’t know about, changing the DNA and gene structure.  Then all the people in power and the rich decide to leave the planet earth, taking a sizable chunk with them, paying off the farmers by buying their farms, then handing them over to the scientists to continue manipulating food DNA, only to have an effect on humans that turned them into beings that represented their area of dwelling.  So, if you lived near a body of water then you started to mutate into an aquatic creature, if you lived more inland you would become more bug or cockroach like.  The story is there, I just have to learn to put it down on paper.  I’m taking art classes now to revive an old interest and talent.

DEQ: The name reminds me of Drexciya. Are they influences to your sound?

Paris The Black FU: Yes and no.  I used to listen to and play a lot of techno and electro, as you may know, and the influences are from so many different sources that, for me, it’s hard to say it’s just from one source.  I played and listened to The Advent, Drexciya, Dopplereffekt… man who else?  It’s hard to recall but all I can say is thank you for making that observance because Drexciya is one of my top 5 favorites.

DEQ:How important is Detroit to your music?

Paris The Black FU: I’m not sure I understand the question.  If you mean, how important is it for me to sound Detroit?  I can honestly say, I don’t think about it.  I don’t start a track with the idea of sounding Detroit, I don’t think anything I’ve ever done has had that Detroit sound.

DEQ: You enlisted some Detroiters, namely sensations Aux 88 and Ectomorph to mix “Boanerges and the Watery Deep.” How did they come into the fold to remix this track?

Paris The Black FU: They came to mind.  We asked.  They said yes.

Did you have prior relationships with Cristian Vogel, the Advent & Zein, Dadub and The Exaltics?

Paris The Black FU: Well I have another project called the Children of Radiation and the idea is that the wasteland they live in is in fact their utopia.  Being ravaged by radiation from living too close to nuclear test sites… Explosion!!!  And there you have it.

DEQ: What is the track that you both have made so far that most embodies TBF?

Paris The Black FU: That’s a good question!  I’m not sure because they all seem to have the sound and feel that represents the story and the scenes and the characters and the mood.  I really like ‘The Scientists Were Only Being Scientific’, ‘Constructing A Powerful Enemy’ and ‘A Groundless New World’, although the whole album has its moments.

Luxus Varta: “We Cannot Help You” and “The Oceanic Depths Of Jupiter” for me.

DEQ: Do you have a formal process in writing tracks? Do you both sit in the studio together and work on things or is it a back and forth situation?

Paris The Black FU: No, not unless that process is just going in and seeing what happens.  I don’t go in with an idea of what I want to do, I just go in and if I hear a sound of something then I let it carry me, I let things happen.  But if nothing happens, then nothing happens. It’s more of a back and forth situation.

Luxus Varta: Same here. Things come as they come, it’s just a question of emotion.  We usually agree with the atmosphere of a track.

DEQ: Do you use more hardware or software in your projects?

Paris The Black FU: I use a little of both although I’m leaning more towards mostly hardware. I’ve got my eye on that Moog Matriarch and a few other things.

Luxus Varta: Mainly hardware.  I only use plugins as post-recording adjustments.

DEQ: Do you have a go to piece of gear/software that you can not be without?

Paris The Black FU: Yes. My brain!  The ideas and creative process begins and ends with the brain. I would also say for hardware my Moog Mother 32s and for software I would say U-he Repro 1 is absolutely the bomb to me.

Luxus Varta: My Ensoniq Fizmo is one of my favorite synths.  I always have a surprising trip with it!

DEQ: Are you both going to tour together when this COVID madness is behind us? If yes, will it be DJ sets or live?

Paris The Black FU: I would have to say a strong no with a tiny maybe.  If it happens, I’d say live.

DEQ: What’s on the horizon for releases?

Paris The Black FU: Well, we just released S.O.S.A.D. (same old song and dance)’ on Engineroom recordings and we are in the process of making the next album.

Paris The Black FU: Now you’re making me mad!  I never was a hotdog fan but those loose burgers were my thing, I could eat those things all day long with everything!

Luxus Varta: Sorry, I’ve never been to Detroit… but I can say that Black FU Burgers are very tasty!

To hear their track “Dystopian Utopia” on DEQ17_18 go to www.detroiteq.com/listen as we are streaming all eight tracks for free. The LP will be in stores mid November.